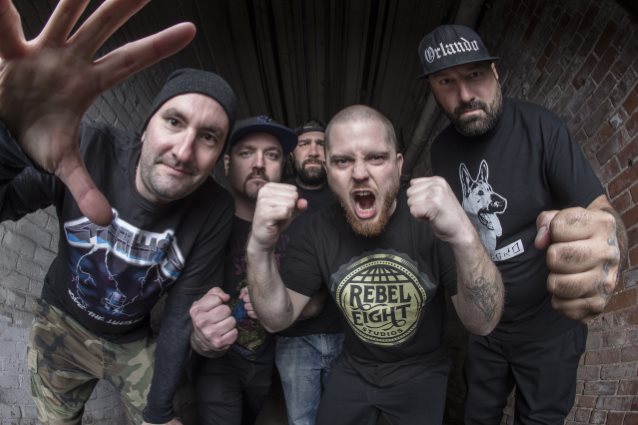 "Seven Enemies", the new video from Connecticut hardcore/metal masters HATEBREED, can be seen below. The song is taken from the band's latest album, "The Concrete Confessional", which was released in May 2016. The CD was produced and mastered by longtime collaborator Chris "Zeuss" Harris (ROB ZOMBIE, SUICIDE SILENCE, WHITECHAPEL) and mixed by Josh Wilbur (LAMB OF GOD, MEGADETH). Artwork was created by Marcelo Vasco (SLAYER).

Asked by Grasser Production if there are any plans for HATEBREED to return to the studio to begin work on the follow-up to "The Concrete Confessional", drummer Matt Byrne said: "Right now, it's touring. We have so much planned for the rest of the year. We talked about maybe doing some stuff, like, in December — maybe start throwing some ideas around. But nothing set in stone about going in the studio and doing a new record. I mean, right now it's [all about] touring. We have so many dates lined up through the rest of the year. We have some ideas for some other stuff. It's the twentieth anniversary of [HATEBREED's debut] album 'Satisfaction Is The Death Of Desire', so maybe do a couple of shows for that, something special. Right now, it's just all about shows and touring."

Added guitarist Frank Novinec: "We're not one of these bands that records stuff on the road. I feel there's too many distractions. And it's not the '70s or the '80s where bands are putting out sometimes two records a year, or one record a year. We're a band that does that every three years. I think we tour the entire world per record, and by the time we've done all that, three years have gone by. So it'll probably be at least another year before we get back in the studio, I think, it's safe to say."