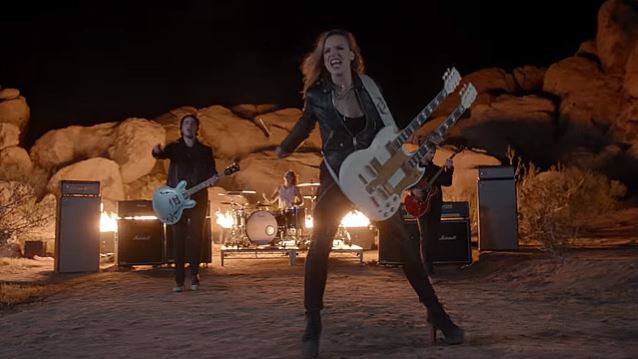 HALESTORM's video for the song "I Am The Fire" can be seen below.

When HALESTORM came up with the title for "I Am The Fire", the band thought about all the different things that it could mean. Guitarist Joe Hottinger told TeamRock: "I think the lyric that sums up the whole song best is, 'I am the one that I've been waiting for.' It's the idea that nobody is holding you back except yourself. So be the fire."

He added: "If you listen to the song closely, there's no doubled vocals or harmonies or anything like that. It's all Lzzy [Hale, guitar and vocals] on her own, owning it. I am the fire. There is nobody else. That's the message of this song."

Lzzy Hale said in an interview that the band didn't set out to make a lighter album with its latest effort, "Into The Wild Life" — even though it worked out that way. Hale explained to May The Rock Be With You: "When we were talking about making songs heavier, it didn't necessarily mean stacks of Mesa Boogies and a lot of crunch and layers and walls of guitars." Hale added that the band followed only two rules while recording: "We're not going to record the record in the same way that we did the last two, and is it good or not?"

Hale told The Pulse Of Radio that the new disc felt like a natural evolution for the band while they recorded it. "The actual meaning of and the reason that albums are called albums is because it is a snapshot, it is a collection of imagery and sonically, you know, of a place and time in your life," she said. "And everyone keeps coming up to us that has heard the new record and says, 'Oh my gosh, this is such a leap from your last record,' and to us, 'cause we've just been living it, it's like, 'Oh no, it's not!'"

Hale also spoke about choosing a producer, Jay Joyce, who was not especially known for rock records. She explained: "He’s like this cool, chain-smoking, creative ball of energy, and his bread and butter — because of circumstance and the area that he's in Nashville — his bread and butter has been a lot of country artists and a lot of alternative. I believe we were the first hard rock band that he's recorded, and so it was just a really neat perspective to have, having somebody that loves rock and roll that hadn't really had the opportunity to show that."

"Into The Wild Life" debuted at No. 5 on The Billboard 200 album chart, selling 56,000 copies in its first week of release — more than double the first week haul of the band's previous effort, 2012's Grammy-winning "The Strange Case Of…"