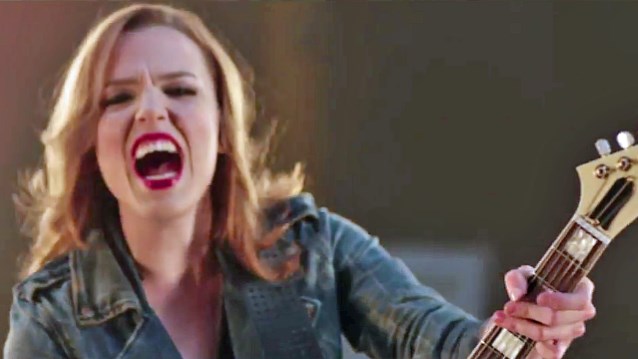 HALESTORM has just released the official video for its new single, "Apocalyptic", and singer Lzzy Hale told The Pulse Of Radio that the song strikes a middle ground between the band's older material and the new directions it's exploring on its next record. "I didn't want to scare you guys too much with the first single [laughs], so we decided to go with this one. But there's a lot on this record that… I don't know, you just kind of throw caution to the wind, and there's a certain freedom that comes with that. But then there's also this kind of, there's a nervousness. But, you know, bottom line is that we came out with a record that we're really proud of."

"Apocalyptic" is taken from HALESTORM's third studio album, "Into The Wild Life", which will be released in Europe on April 3 and North America on April 7.

The new disc was recorded last year in Nashville and features 13 new songs.

HALESTORM is currently touring with Eric Church and has announced a series of live dates with THE PRETTY RECKLESS that will begin in late April.

Hale told The Pulse Of Radio that "I've been wanting to tour with [Taylor] for a long time. I don't know what it is about her, but she's a freakin' rock star, and I really enjoy listening and seeing the way that she carries herself. She's carrying that rock 'n' roll torch. We're gonna have a blast and it's gonna be awesome."

Hale said she was asked the same questions about rivalry when HALESTORM toured with EVANESCENCE, explaining, "Amy Lee is one of the coolest chicks I've met in this world. Everybody said the same thing to me beforehand: 'I don't know, man.' I'm like, 'Don't knock it until you try it, baby!' And we had so much fun."

Hale was asked in the same interview if she finds it difficult to maintain a relationship while on the road. Hale replied, "In a relationship, you have to literally have everything out there to this other person, and they have to do the same thing with you, or it's not gonna work. I've never been a jealous person either, and as of right now, I'm dating someone who is the same way. So we have a very amazing trust thing going on."

She added, "I think you have to work hard, no matter what, at a relationship, but, really, the first couple of steps — laying everything out there — has been total saving graces for me and my relationship."

Hale has been rumored as recently as 2013 to have dated HALESTORM guitarist Joe Hottinger, but the singer has not revealed who she is in a relationship with now.