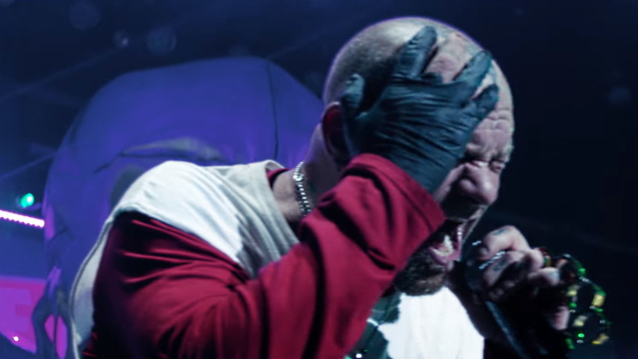 "Inside Out", the new music video from FIVE FINGER DEATH PUNCH, can be seen below. The song is taken from the band's eighth album, "F8", due on February 28 via Better Noise Music.

Fans who pre-order the album digitally will receive an instant download of "Inside Out" along with two other new tracks before the release on February 28.

FIVE FINGER DEATH PUNCH guitarist Zoltan Bathory said: "We had an extremely successful, yet tumultuous couple of years as a band. We didn't just weather the storm but came out on the other side better than ever. It was a focused sober group recording, our most important album to date and without a question it shows. This album represents rebirth, progression, transcendence both personally and musically." Vocalist Ivan Moody added: "This record to me is 'absolution' — everything I've done in my life has led up to this moment."

Moody spoke about "Inside Out" with Metal Hammer magazine last month, saying: "It's about alcoholism. It's about my family leaving. It's about my bandmates. It's about looking at myself in the fucking face and saying, 'Dude, you're going to have to do this because nobody else is coming.'"

He said about the record in general: "This album has not been fucking easy to make. There was always somebody fucking quitting. Somebody wants to fire another guy, somebody's unhappy with someone's lifestyle. These things happen on a daily basis."

Bathory recently said that the band's new LP could be its best yet. He said: "We have a little pie that we belong to in the musical spectrum, and within that, the grooves — there are these big, nasty grooves that feel just heavier and grimier, and that's kind of what's happening. The energy of what's in the band now is affecting this process."

The drums on the disc were laid down by Charlie "The Engine" Engen, who made his live debut with the group during its fall 2018 tour with BREAKING BENJAMIN. He stepped in for original drummer Jeremy Spencer, who left the band in December 2018 due to a back injury.