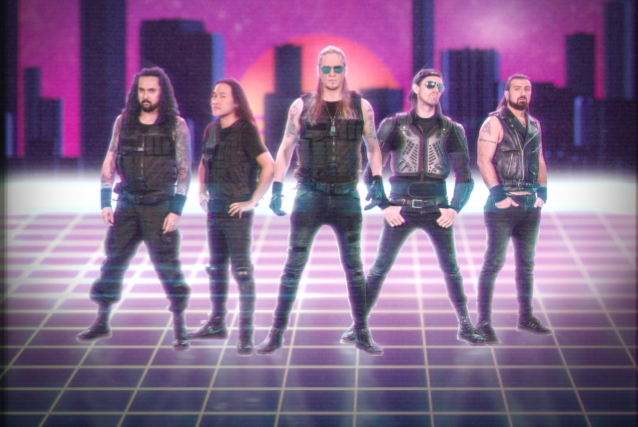 The official music video for DRAGONFORCE's new single, "Heart Demolition", can be seen below. Directed by the Mase Brothers, the clip utilizes a classic arcade game look while the song features DRAGONFORCE's signature uplifting melodies and furious guitar solos.

Guitarist Herman Li said: "The fans are really going to like this video because it's classic DRAGONFORCE: big choruses and a tribute to the Sega Mega-Drive console. The haters are going to like it even more because you'll get to see Sam Totman without his hat on for the first time in 10 years, showing off how bald he has become!"

"Heart Demolition" is taken from DRAGONFORCE's eighth full-length album, "Extreme Power Metal", which will be released on September 27. Produced in Los Angeles, California by Damien Rainaud at Mix Unlimited, "Extreme Power Metal" was also recorded, in part, on Li's livestream channel on Twitch with participation from the fans.

01. Highway To Oblivion
02. Cosmic Power Of The Infinite Shred Machine
03. The Last Dragonborn
04. Heart Demolition
05. Troopers Of The Stars
06. Razorblade Meltdown
07. Strangers
08. In A Skyforged Dream
09. Remembrance Day
10. My Heart Will Go On

Regarding "Extreme Power Metal", Li said: "This album again combines the best of DRAGONFORCE in an even bigger, more epic way than we have ever done before. We are so excited for fans to hear it." Following the departure of Vadim Pruzhanov from the band last year, the keyboards of this new album were performed by Coen Janssen of symphonic metal titan EPICA, bringing a new dimension into a DRAGONFORCE album. Guitarist Sam Totman says: "We worked really closely with Coen on this new album. We are so happy with what he has brought into this new album. Every fan will be so happy to hear his majestic playing."

Following the release of "Extreme Power Metal", DRAGONFORCE will begin a world tour in support of it. Li promised: "In this age where our music is easily accessible, I am not going to waste time trying to describe the sound of our new album. I'll let the music do the talking. However, what I can tell you is our upcoming tour will be our biggest in a decade. We have a massive epic production and a really special surprise for VIPs. We can't wait to see everyone out on the road."

Leclercq, who became an official member of DRAGONFORCE in 2006, played his last show with the band earlier this month at Elb-Riot in Hamburg, Germany.

Filling in on bass for the U.S. leg of DRAGONFORCE's upcoming world tour will be musician and YouTube personality Stevie T (Steve Terreberry).