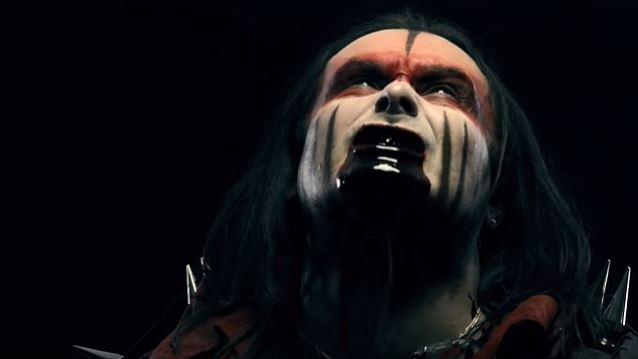 "Blackest Magick In Practice", the new Sam Scott-Hunter-directed video from British extreme metallers CRADLE OF FILTH, can be seen below.

Comments the director: "There's dark madness in this video. 'Blackest Magick In Practice' is a deeply tragic tale of lost love. It's the grief stricken insanity of trying to bring back that loved one from the dead; desperately trying to hold on to that person who's gone, even if that leads down a dark and gruesome path.

"I don't want to give it all away, but I will say that the hardest part of the production was getting hold of a human ear. I wanted to convey the power of the band too, in amongst the romance, madness and magick.

"Behind the imagery of the lyrics is a great and powerful metal band of amazing musicians, and I hope people can feel the intensity of the band when they watch this. It is intense viewing. There should be a bit of madness in the video, because there's madness in this song."

"Blackest Magick In Practice" is taken from CRADLE OF FILTH's eleventh studio album, "Hammer Of The Witches", which was released on July 10 via Nuclear Blast. The CD marks the first release with CRADLE OF FILTH's new lineup, which includes new guitarists Ashok (of Czech groups ROOT and INNER FEAR) and Richard Shaw (of English acts EMPEROR CHUNG and NG26).

CRADLE OF FILTH will embark on the "Inquisitional Tourture" North American headlining tour in January. Support on the trek will come from BUTCHER BABIES and NE OBLIVISCARIS.