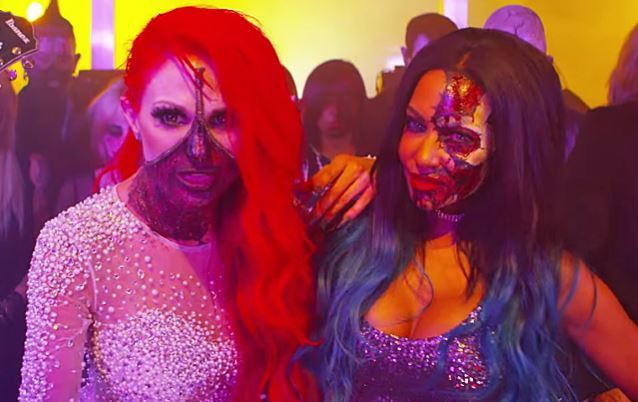 "Monsters Ball", the new video from Los Angeles-based metallers BUTCHER BABIES, can be seen below. The song is taken from the band's sophomore album, "Take It Like A Man", which will be released on August 21 via Century Media. The CD was produced by Logan Mader, who has previously worked with FIVE FINGER DEATH PUNCH, DEVILDRIVER, CAVALERA CONSPIRACY and GOJIRA.

BUTCHER BABIES' Heidi Shepherd stated about the "Monsters Ball" clip: "The moment I spoke with director, Dan Dobi, about the ideas we had for a literal Monsters Ball, he jumped at them and began tossing even more great ideas into the melting pot.

"We wanted to use the swingy feel of the song to create a jazz-type club scene. A Monsters Ball is how we describe the pit.

"Being an adult who always has and STILL thrives in the pit, I've always seen it as a carnival of monsters. Where it doesn't matter what you look like, where you came from, what you do for a living, your sexual orientation, etc. We're all the same monsters there for the same reason; to rock the fuck out!

"This song is about the beautiful, positive energy at a metal show. Too many times, mainstream media makes these shows out to be dangerous and evil, but what they don't know is that we are a big family who in that moment will do anything for each other. A family who rocks together, inevitably stays together. That's our Monsters Ball."

Adds co-vocalist Carla Harvey: "I always felt that metal music was something that brought all of us misfit kids together. With the lyrics to 'Monsters Ball', we wanted to celebrate that and really paint a picture of the moments that we spend together side by side in the mosh pit, letting the music course through our veins and move us."

States guitarist Henry Flury: "Musically, the song has a very swingy, fun and energetic feel to it. It's almost something you can dance to. The ballroom vibe seemed perfect for this song and Dan Dobi knocked it out of the park! We had such a blast making this video with all our friends!"

Added bassist Jason Klein: "This was by far the most fun I have had making a music video. Everyone got express their inner 'monster.' Felt very comfortable working with Dan Dobi and his team, and I believe he really understood what we were all aiming for with this one."

Added Heidi: "But the thing is we're not ever gonna sacrifice who we are for that. What we're attempting with this is to bring back the metal and the aggression into radio. So we kind of… We merged the two worlds. And radio stations who have heard it so far are impressed and we're very excited for that."

On the topic of the "Take It Like A Man" album title, Carla said: "We all come from different places and backgrounds, but every member of this band had to fight to be the person he or she is today. That's the whole basis for the record. It's not a gender thing. It's the inner strength you have to find in order to pull your boots up and keep moving forward, whatever the situation may be."

While penning lyrics, Harvey and Shepherd also opened up like never before. Blatant, brutal, and (sometimes) belligerent honesty was the only rule.

"You have to dig to get that emotion out," explained Harvey. "Metalheads can sense authenticity. They know when you're real. Everything we write comes straight from the heart and our own experiences. It's not cookie-cutter bullshit."

That openness has already turned countless fans into believers. "Take It Like A Man" espouses an inspiring final word.

"We want to coerce feeling," Shepherd said. "If you're a musician who does that, you've succeeded. We just want to inspire anyone who listens to us — and melt their faces off."

BUTCHER BABIES kick off a massive European touring run on July 7 and then will join GWAR and BATTLECROSS across North America from August 25 to September 18.