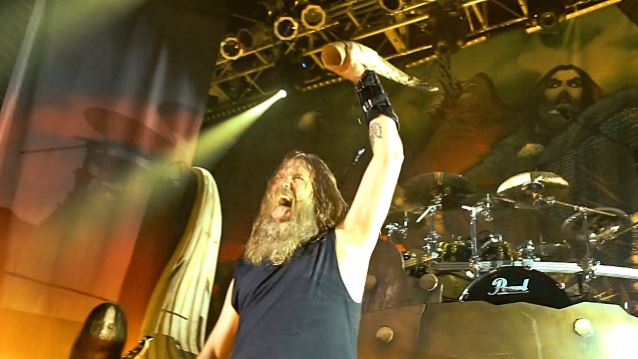 Swedish death metallers AMON AMARTH have released the official music video for the song "Raise Your Horns". The clip, which can be seen below, which features cameos from figures across metal, sports, television and horror cinema, including King Diamond, Zakk Wylde, Dave Mustaine, members of SLAYER, DISTURBED, MACHINE HEAD, BEHEMOTH, NIGHTWISH and many other bands, along with Olympic swimmer Paul Biedermann, NHL goalie Mike McKenna and MMA fighter Shayna Baszler, actress Jessica Pimentel of "Orange Is the New Black" and "Hatchet" director Adam Green.

"Raise Your Horns" is taken from AMON AMARTH's latest album, "Jomsviking", which debuted at No. 19 on The Billboard 200, having shifted 21,000 equivalent album units in the week ending March 31.