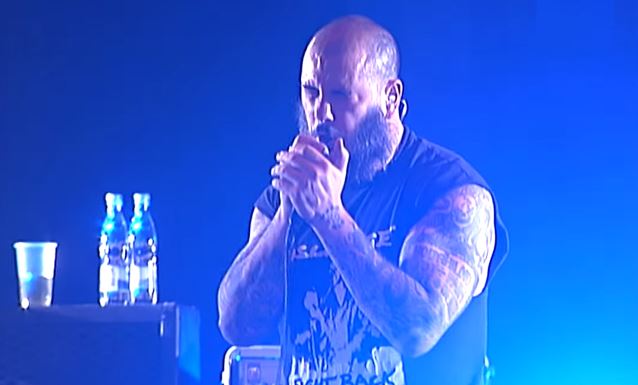 Video footage of former PANTERA frontman Philip Anselmo and comedian, radio host, author and musician Dave Hill performing a cover version of THE SMITHS' "Please, Please, Please Let Me Get What I Want" after the screening of their "Metal Grasshopper" web series on Wednesday (July 23) at One Eyed Jacks in New Orleans, Louisiana can be seen below.

In an interview with Radio.com, Anselmo gushed about THE SMITHS, saying: "THE SMITHS are humorous, THE SMITHS are poppy when they wanna be, but also very grim at times. And I think that maybe the more grim stuff might appeal to heavy metallers in a way.

"You think you know depression, grimness and self-loathing? Listen to [THE SMITHS singer] Morrisey.

"THE SMITHS really took me aback, because I'd never really heard a vocalist who was, I guess, androgynous to a certain degree lyrically, be so honest, be so damn honest. And then so bleak, too, at the same time with this edge of humor.

"I always say extreme music comes in all genres. [THE SMITHS] are an extreme band in the same way THE BEATLES were extreme, or QUEEN was extreme. THE SMITHS should be held in that lofty position as well.

"Metal Grasshopper" is a web series produced and directed by Chris Lee, the SUPAGROUP guitarist-and-singer-turned-web–series-producer, who is married to Sean Yseult, the former WHITE ZOMBIE bassist. According to NOLA.com , the series, which was shot mostly at Anselmo's wooded compound north of Lake Pontchartrain, follows the misadventures of a budding hard rock star, played by Hill, as he seeks guidance from a metal mentor, played by Philip.

Lee is finalizing a deal with a web portal to air "Metal Grasshopper" this fall, possibly as 10 four-minute episodes.