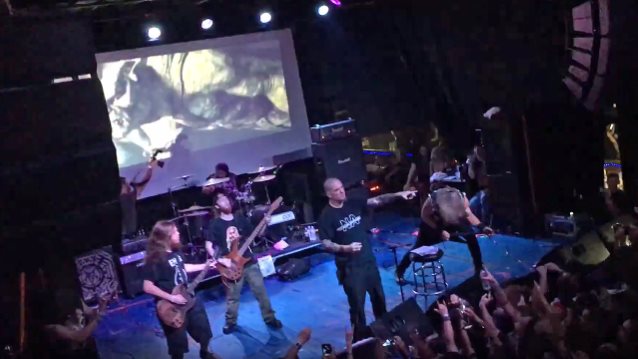 Former PANTERA and current DOWN singer Philip Anselmo, Edwin Neal ("Texas Chain Saw Massacre"), and Wayne Abney of HAMMER WITCH handled lead vocals for Texas metal titans WARBEAST at their "Enter The Arena" record-release show this past Friday, July 14 at The Rail Club in Ft. Worth, Texas. They were filling in for regular WARBEAST frontman Bruce Corbitt, who recently announced that he's been diagnosed with esophageal cancer — a treatable though rarely curable disease — facing the likelihood that he will never be able to sing again.

Fan-filmed video footage of this past Friday's concert can be seen below (courtesy of Robert Archer).

"Enter The Arena" will be released on August 4 via Anselmo's Housecore Records. Captured at Anselmo's Nodferatu's Lair, mixed by Mike Thompson at the Riff Factory and mastered by Lee Russell, the disc features newest WARBEAST recruits, guitarist Drew Shoup and bassist Lyric Ferchaud, and stands among the band's most potent, volatile, and unrepentantly powerful offering yet.

"We recorded 'Enter The Arena' exactly a decade after we formed WARBEAST," said Corbitt. "The nucleus and founding members of this band [guitarist Scott Shelby, drummer Joey Gonzalez and Corbitt] provided the essential veteran leadership that was vital for us to reach our goal of creating our magnum opus. The three of us also contributed our unique individual styles to guarantee that we still sound like WARBEAST. But with the addition of our two newest members — guitarist Drew Shoup and bassist Lyric Ferchaud — who I call the 'Youngbloods,' it was like adding a breath-of-fresh-air to our chemistry. We definitely sound like a well-oiled-machine on this album. So get prepared for the upcoming onslaught of pure, fresh, and quintessential Texas thrash!"

"'Enter The Arena' is WARBEAST at its finest in performance, writing and tone quality," added Shelby. "I'm confident that it will please any rivethead out there! I believe it's mine and our best work to date."

In a recent Facebook message to fans, Corbitt revealed: "After much discussion with the doctors and specialist, they've told me there's no chance within any reasonable time that I'll ever be able to perform again. So it breaks my heart at this time that I'm forced to announce my retirement from singing.

"I'm sorry to all of my bandmates for letting them down. I'm devastated with all of this hitting me so fast. I'm still in shock.

"Thanks for all of the great support all these years," he continues. "You're the best fans and I love all of you! We at least have a great WARBEAST album and music video coming soon.

"I can't even begin to explain my feelings. You guys have given me the strength I need to even prepare for this fight. Honestly, I was close to losing hope that there was any good to come out of this. Of course, I'm scared for my life like any normal human being would be. Those moments when I can get on Facebook and scroll through all of your messages, the emotion takes over. I cry, I get stronger, I also realize what all of you mean to me. I do believe in the power prayer and positive vibes. And I have all of you to thank for that."

Corbitt, who recently began an intensive schedule of radiation treatments, played his final show on May 27 at the Rail Club in Fort Worth, Texas. 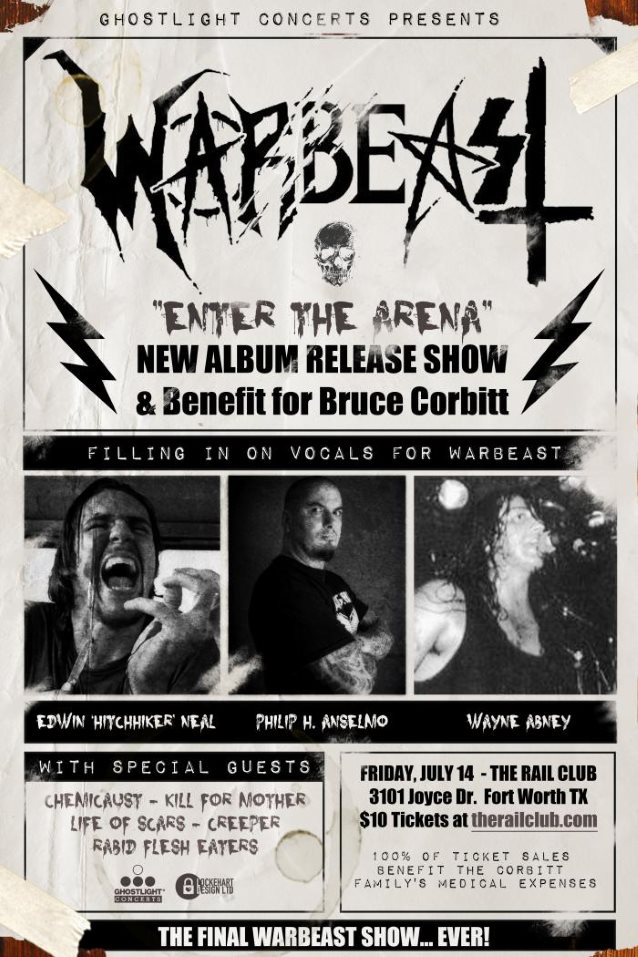