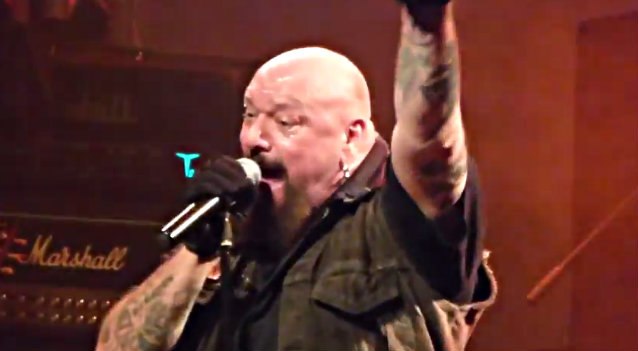 Fan-filmed video footage of former IRON MAIDEN singer Paul Di'Anno performing covers of RAMONES' "Blitzkrieg Bop" and JUDAS PRIEST's "You've Got Another Thing Comin'" on December 19 at Harry B. James in Stockholm, Sweden can be seen below.

Asked why he thinks his two LPs with MAIDEN became timeless and iconic in the rock history, Di'Anno told Spotlight Report: "I think because when we started, the whole punk thing was so bloody huge, which I loved and still love punk to this day, and the heavier music just became so distant; they called it dinosaur rock back in the day.

"When we got signed and the whole New Wave Of British Heavy Metal started, that's what really kicked off what we have today. If it wasn't for MAIDEN and bands like SAXON, MOTÖRHEAD, etc., you would never have had bands like METALLICA, SLAYER, MEGADETH and ANTHRAX. If you didn't have those bands, you would never have had SEPULTURA, MORBID ANGEL and then PANTERA, etc. So at the time, they were just bloody good albums, but in the history of things, they really kicked off what started for anything today that has heavy guitar. And yeah, they are timeless. Those albums still sell millions. You don't see the crap that was around then still selling shit, like SHAKIN' STEVENS or SPANDAU BALLET, do ya?"