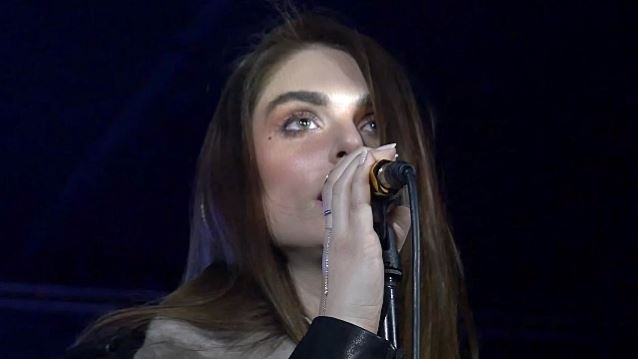 ARO, the dark, ominous musical project of Aimée Osbourne, the daughter of Ozzy and Sharon Osbourne, played a special six-song showcase set at The Mercury Lounge in New York City on April 26. Fan-filmed video footage of the performance can be seen below.

ARO's "Raining Gold" song was released as a single on March 5. An EP will follow this summer.

Regarding her musical direction, which has more in common with Lana del Rey than BLACK SABBATH, Aimée tells RollingStone.com: "I've always been attracted to music and films and people that are just a little bit unusual and a little bit haunting. It's just a certain energy...something very cinematic and a little bit creepy."

Aimée reportedly refused to appear in the reality show "The Osbournes", and even went as far as to move out of the family home in an effort to stay away from the cameras. She later explained in an interview: "I want to be a singer, and I felt if I'd stayed with 'The Osbournes' and done the whole thing, I would have been typecast right away."

She elaborated during the RollingStone.com interview, saying: "I don't think I will ever cross-contaminate my private life and my family life with my public and professional worlds. For me, nothing's more important than having a very clear boundary between the two. That's just part of who I am."