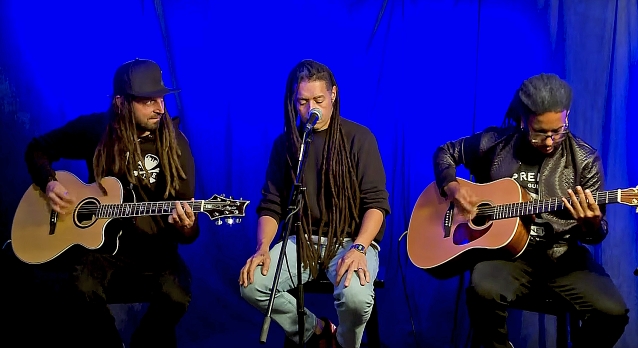 Video footage of NONPOINT members Elias Soriano, Rasheed Thomas and B.C. Kochmit performing an acoustic version of the band's song "Chaos And Earthquakes" and the HardDrive Radio studio can be seen below.

"Chaos And Earthquakes" is taken from NONPOINT's tenth album, "X", which was released on August 24. The follow-up to 2016's "The Poison Red" was produced by Fred Archambault, who has previously worked with ATREYU and AVENGED SEVENFOLD, among others.

In a recent interview with Bods Mayhem Hour, Soriano stated about working with Archambault: "['The Poison Red' producer] Rob [Ruccia] also worked on this record as well. He not only played bass, but he was mainly the engineer of this record because it's the studio he works out of, the Uptown [Recording], he is their head engineer. He's an amazing friend and dare I say, sixth member of the band.