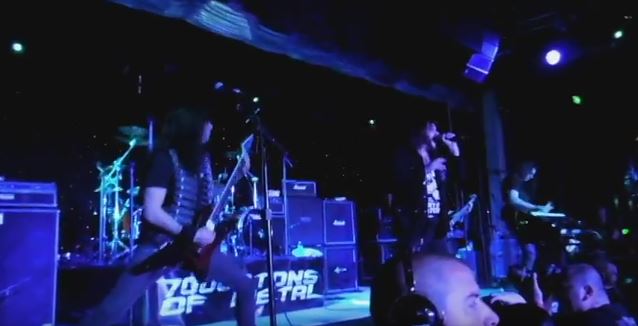 Fan-filmed video footage of FIREWIND performing aboard the 70000 Tons Of Metal cruise, which set sail from Port Everglades in Fort Lauderdale on February 4 and returned on Monday, February 8, can be seen below.

FIREWIND, the band led by Greek guitar virtuoso Gus G., well known in rock and metal circles for his work as Ozzy Osbourne's guitarist, recently announced the addition of singer Henning Basse (METALIUM, SONS OF SEASONS) to the group's ranks. Basse previously toured with FIREWIND on various continents in 2007 and was most recently the singer in Gus's solo touring band.

Basse fronted FIREWIND during the 70000 Tons Of Metal cruise and will appear with the group at this year's Graspop Metal Meeting festival in Belgium.

Said FIREWIND in a statement: "Since [2014], [Henning] started playing some shows with Gus G.'s solo band and he delivered amazing performances, stunning the crowds all over Europe! Henning is an amazing frontman and a personality that totally fits with what FIREWIND is all about."