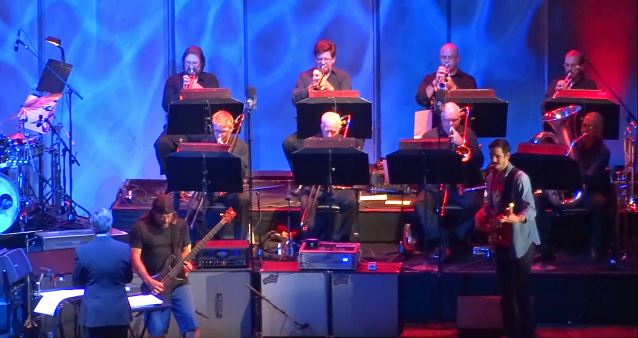 The late, brilliant bass pioneer Jaco Pastorius changed the instrument forever with fluid passages that leaped out of the rhythm section. The visionary player, arranger, composer and producer was celebrated last night (Wednesday, August 12) at the Hollywood Bowl by a range of artists with music from the iconic "Word Of Mouth" album reimagined by Grammy-winning arranger Vince Mendoza and clips from the new "Jaco" documentary, produced by METALLICA bassist Robert Trujillo.

Fan-filmed video footage of Trujillo performing at last night's event can be seen below.

According to The Pulse Of Radio, Trujillo is spearheading a series of events to promote "Jaco". The film is now set for release on November 27 through on-demand and streaming services, with the soundtrack scheduled to arrive on the same day.

Before that, however, "Jaco" will be screened at several special events, including a showing this Friday (August 14) in Santa Ana, California with Trujillo and director Paul Marchand in attendance for a question-and-answer session. Limited theatrical screenings will also begin on August 17 in Los Angeles, with more screenings coming through October in Nashville, Memphis, Atlanta, Portland, and other cities.

Trujillo has been working on the film for five years and told The Pulse Of Radio that finding the right balance of material was the biggest challenge. "There's just so much in his life, so many different angles to it, and everybody has a story," he said. "A lot of them are funny, some of them are sad, and I guess the biggest challenge is trying to get the balance right. Because it is a tragic story, but there's obviously a lot of positives, and Jaco did have a sense of humor, so it's really a very wide scenario."

Trujillo launched a PledgeMusic campaign earlier this year to raise funds for the film's completion, with incentives for contributors including bass lessons, signed Blu-rays or DVDs of the film and other personalized mementos.

Trujillo told LA Weekly that "Jaco" has already cost him a lot of money out of his own pocket. He revealed: "When you are trying to do it right, it's costly. I've been a part of this film for five years. I've spent a huge chunk of money. It's great because I feel it needs to be done, but I have [other] responsibilities, too."

Trujillo explained that just because he is a member of METALLICA, that doesn't give him access to unlimited funds, saying, "People don't understand. I didn't write [METALLICA's huge hit] 'Enter Sandman'. It's a little different for me."

The film will include interviews with Jaco's friends and fellow music legends, including Flea, Geddy Lee, Carlos Santana, Sting, Bootsy Collins and many more.

Pastorius was a pioneer who influenced the sound of modern jazz and rock by redefining the sound and the role of the electric bass guitar.