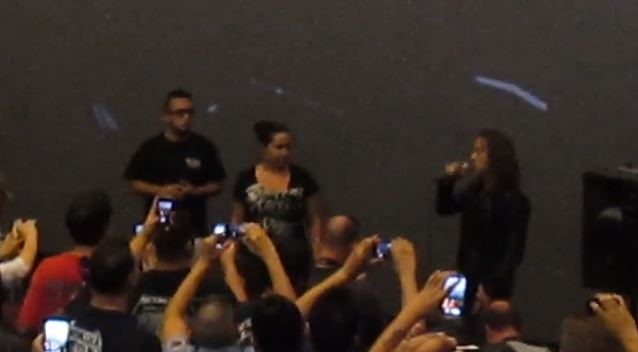 Video footage of METALLICA guitarist Kirk Hammett's appearance at AMC 30 Gulf Pointe Theater in Houston, Texas on Friday can be seen below.

Asked what inspired the whole concept of a narrative-style feature instead of a traditional concert film, Hammett told FEARnet.com: "Well, when you look at concert movies over the last thirty or so years, they all kind of look the same, you know? They combine the concert with interviews with the band, footage backstage, maybe a little history of the band or whatnot... and we didn't want to go down that same old road, especially when you have 3D and IMAX to play with. So we all decided that it had to have a story to really make it as memorable and unique as possible."

Hammett also spoke about what it was like to see himself on a thirty-foot-high screen in 3D for the first time. "You know, I really do not like watching myself on screen, so it was actually pretty laborious for me," he said. "It's no problem for the other guys, but watching myself, all I could think was, 'Oh, man, what a big dork I am... a big dork in 3D IMAX!'"

Regarding whether there was special blocking or choreography that made the 3D shoot more challenging, Hammett said: "It wasn't so much the 3D camera setup as the stage itself, which had to function very specifically for the movie. There were sections that were really dangerous, shooting flames and smoke everywhere, and we had to know exactly where the 'safe zones' were, so we didn't get torched or electrocuted, or have a thousand-pound rig fall on our heads. It was pretty crazy."

"Metallica Through The Never", opened this weekend to an estimated $1.67 million — the best opening for a concert film ever at IMAX theaters. The movie, which debuted on 308 3D IMAX screens, earned an estimated $780,000 on its first day. That gave the film a per-location average of $5,482. A blend of concert movie and fictional narrative, it will expand to 650 theaters next weekend.

Financed by the METALLICA members themselves at a budget of $18 million, "Metallica Through The Never" is the first new release via Picturehouse, the full-service independent film marketing and distribution company started in 2005, which reopened its doors with founder Bob Berney at the helm. The film, written and directed by Nimród Antal ("Kontroll", "Predators"), stars members of the iconic rock band and Dane DeHaan ("Chronicle", "The Amazing Spider-Man 2"). DeHaan plays a young band crew member who is sent out on an urgent mission while the band is playing a rousing live set in front of a sold-out crowd and unexpectedly finds his world turned completely upside down.