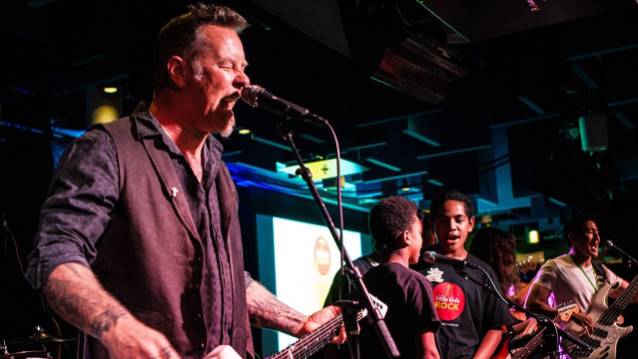 Little Kids Rock, the nation's leading nonprofit provider of music instruction and instruments to public schools, honored METALLICA frontman James Hetfield at the charity's annual "Rockin' The Bay Benefit" on Saturday, November 9 at Facebook's Menlo Park, California headquarters. Hetfield was recognized for his ongoing support for and contributions to the organization and received the inaugural "Livin' The Dream Award," which was created in honor of Josef Desimone, the late executive chef of Facebook who spearheaded this benefit for Little Kids Rock and who was a huge fan of METALLICA.

Video footage of Hetfield performing with kids at the "Rockin' The Bay Benefit" can be seen below.

More photos are available at the METALLICA Facebook page.

"We're presenting James with this special award as a way to not only recognize his support of Little Kids Rock over the years, but also his role as an inspirational presence in a band that has revolutionized and defined a music genre," said David Wish, Little Kids Rock founder and executive director.

"Josef was a passionate philanthropist who touched our lives with his generosity and we know he would've been proud to see James honored at the event held in his memory."

The benefit assembled a star-studded lineup of musical luminaries to help raise awareness and funds for its mission of revitalizing music programs in school districts whose music programming has been impacted by budget cuts. This year, Jeff Campitelli, most famously known as the drummer on Joe Satriani's various albums, and Marcus Henderson, critically acclaimed heavy metal guitarist known for his role as the lead guitarist for the Guitar Hero series, joined Little Kids Rock in celebrating James Hetfield and eleven years of service to schoolchildren in the Bay Area.

"I'm a firm believer in creative expression through music. It is important to have it available from a young age, which is why I support Little Kids Rock's mission to make music education accessible to children," said Hetfield. "I've seen how music changes people's lives for the better and I am honored to have a part in helping the organization enrich young lives through the lifelong gift of music education."

Founded in a single classroom in East Palo Alto in 2002, Little Kids Rock currently funds modern music programming for more than 112,000 public school children in 12 states, including over 3,500 in the Bay Area.

The "Rockin' The Bay Benefit" is held annually in the Bay Area to support schools in the region in which Little Kids Rock was founded.