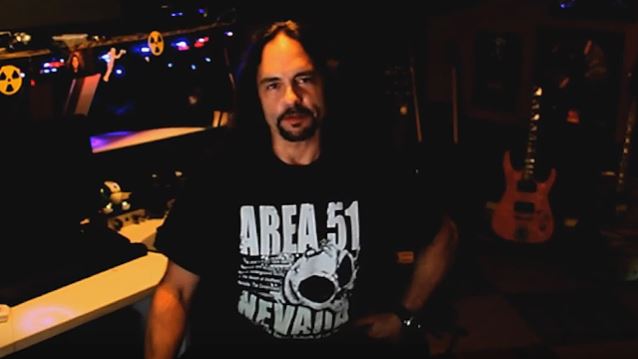 Just two days before his passing, former MEGADETH drummer Nick Menza and SceneFour announced a new art release which was to be made available on June 16.

Understandably, SceneFour and Nick's family postponed the release for a later time.

On July 23, which would have been Nick's 52nd birthday, this art release — now titled "Influx" (formerly "Rhythm Hits The Wall") — will be available.

A newly released video clip in which Menza talks about his art collection can be seen below.

The process of creating artwork from rhythm is an extensive one that begins with the drummer utilizing a bevy of drumsticks that light in a variety of ways similar to that of a painter utilizing brushes with different colors. In the creation process, the drummer is crafting rhythms that translate visually to abstract imagery before they are brought into the SceneFour studio, manipulated meticulously, and laid to canvas.

Those interested in learning more and getting an early preview of "Influx" are encouraged to join the interest list at www.nickmenzaart.com.