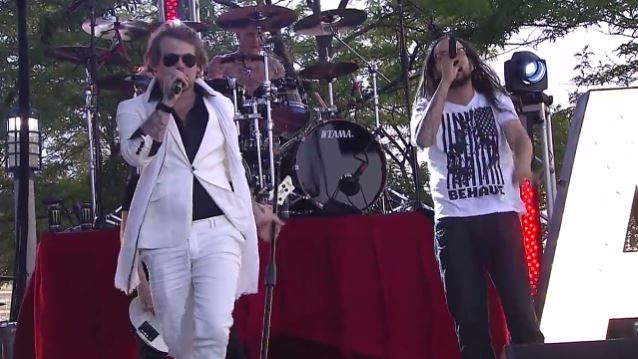 KORN frontman Jonathan Davis joined ASKING ALEXANDRIA on stage at the Gibson Brands AP Music Awards Monday night (July 21) at the Rock And Roll Hall Of Fame And Museum in Cleveland, Ohio to perform a cover of DURAN DURAN's "Hungry Like The Wolf". Check out video footage of his appearance below.

In its inaugural year, the APMAs was hosted by six-time AP cover star Mark Hoppus (BLINK-182) and featured additional performances from A DAY TO REMEMBER, ALL TIME LOW, FALL OUT BOY, FALLING IN REVERSE, JOAN JETT & THE BLACKHEARTS, MACHINE GUN KELLY, MISFITS, SLEEPING WITH SIRENS, twenty one pilots and Brendon Urie of PANIC! AT THE DISCO.

Fifteen awards in total were handed out at the APMAs, including Album Of The Year, Artist Of The Year, Song of the Year, Best Guitarist, Best Drummer, Best Bassist, Best International Band, Best Vocalist, Artist Philanthropic Award and Most Dedicated Fans, along with an Icon Award honoring Joan Jett and a Vanguard Award honoring Billy Corgan.