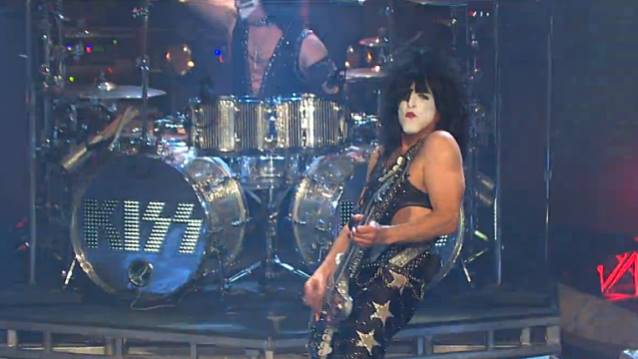 KISS performed on "The Tonight Show Starring Jimmy Fallon" last night (Friday, April 11), one day after the band's long-overdue induction into the Rock And Roll Hall Of Fame. The group played "King Of The Night Time World", from its 1976 album "Destroyer", on the program, as well as four other tracks which are being made available web-exclusive video performances.

RAGE AGAINST THE MACHINE's Tom Morello inducted KISS into the Rock Hall on Thursday, April 10 at Brooklyn's Barclays Center, in Brooklyn, New York.

KISS did not perform at the ceremony because Paul Stanley and Gene Simmons were upset that only the founding members and not later ones were being inducted. Current KISS guitarist Tommy Thayer and drummer Eric Singer sat at the band's table, along with former guitarist Bruce Kulick, who was in the group from 1984 to 1996. Founding members Ace Frehley and Peter Criss were also in attendance.