Video footage of KISS performing the song "Love 'Em And Leave 'Em" last night (Friday, July 23) during a special acoustic concert at San Manuel Indian Bingo and Casino in Highland, California can be seen below.

According to the San Bernardino County Sun, KISS previously played at the same casino in April last year, an event that was billed as a no-makeup, stripped-down show featuring "stories and songs." This year's concert was simply touted as a makeup-free "acoustic evening with KISS."

Asked by The Press-Enterprise why KISS decided to bring the acoustic and storytelling-style show back to San Manuel this year, KISS bassist/vocalist Gene Simmons said: "We enjoyed it. Like all things that we do, we do it only if we want to. Sometimes it takes a lot of work. Sometimes it's just seamless. Like when we do the KISS cruises, it's a lot of work. You're talking, making sure every person gets personalized signed stuff, pose for photos with every person and do a few shows. Playing at your place [San Manuel] is seamless. You sort of get up and it feels like somebody's in your living room, compared to the stadiums we play in. It's easy and we get a chance to not worry about the pyrotechnics and technical stuff. It feels informal."

He continued: "We take our lead from the fans. We're very much connected to our bosses, and despite the fact that we're the ones on stage getting the accolades, ultimately we understand that if the fans weren't there, I'd probably be asking the next person in line, 'Would you like some fries with that?'"

Last year, attendees were given free hats of the Arena Football League team L.A. Kiss, which is sponsored by the casino. The team is co-owned by Simmons and fellow KISS leader Paul Stanley and the show was used to publicize the team's inaugural season. 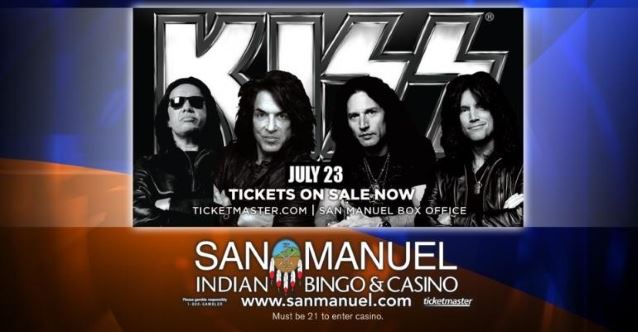