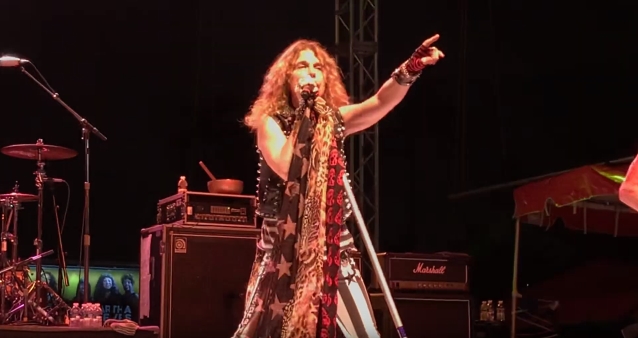 Video footage of KINGDOM COME performing at the Monsters Of Rock cruise pre-party on February 23 at Magic City Casino in Miami, Florida can be seen below.

Singer Lenny Wolf is not involved in KINGDOM COME's current reunion tour, which kicked off last September in Seattle, Washington. The trek — which is celebrating the 30th anniversary of the release of the band's self-titled debut album — features drummer James Kottak alongside guitarists Danny Stag and Rick Steier, bassist Johnny B. Frank and vocalist Keith St. John (formerly of MONTROSE and LYNCH MOB). The tour marks Kottak's first run of shows since embracing recovery after a longtime battle with alcoholism got him kicked out of the SCORPIONS.

Asked if it was difficult to assemble four of the five original KINGDOM COME members for the tour, Kottak told Eonmusic: "No, actually. I originally started talking to Lenny in 2008. I knew the SCORPIONS farewell tour was coming, and we got everything together in about 2012, 2013. We had all five here in L.A., went to rehearsals, had conversations, we had shows, offers on the table, things were good, and then I got a call from the SCORPIONS camp saying, You know what? We decided not to say farewell. We're going to do the album, another world tour, and can you not play with KINGDOM COME and your other projects?' And I was, like, 'Well, okay,' because my allegiance was always with SCORPIONS. I love those guys, I love the band, so I pulled the plug. I had to put everything on the back burner. And here we are now; I had this opportunity, and everything kind of fell into place, so it's wonderful to be where we are now."

Kottak went on to say that he had been talking to Wolf about taking part in the tour "off and on, since about [2017]." He explained: "Things move really slow sometimes. Then suddenly, in January [2018] he just called and said, 'You know what?' — because he announced his retirement [in 2017] and didn't want anything to do with KINGDOM COME — but he said, 'I just really don't want to deal with all the chaos and the manic, crazy rock and roll.' He just wants to quietly retire and live in Hamburg, and I respect him, and he can do that. However, he has given us his blessing. I wish he was here, but it is what it is."

The drummer admitted that he and his bandmates were initially concerned about whether people would accept KINGDOM COME without Wolf. "Absolutely," he said. "And when we first put the word out to promoters and buyers, at first they were going, 'Oh yeah! KINGDOM COME!' Then we had to go back a few weeks later and say, 'Sorry. Unfortunately, there will be no Lenny Wolf.' So, out of the 20 or so offers we had from different buyers, only three actually pulled out. I was surprised; I thought we'd get a little more backlash. But so many bands, especially bands with longevity, they change members; look at THIN LIZZY, how they changed, or name any band that's been around for 25, 30 years, and there's very few that have all the original members." 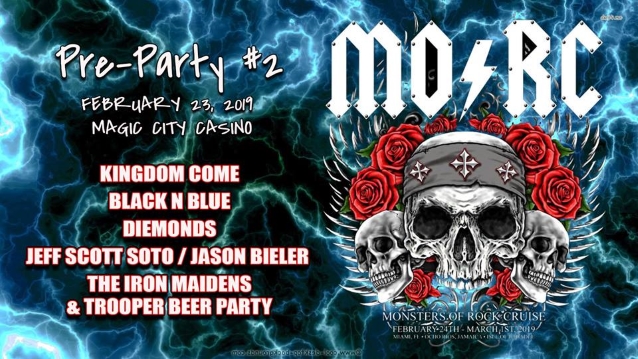