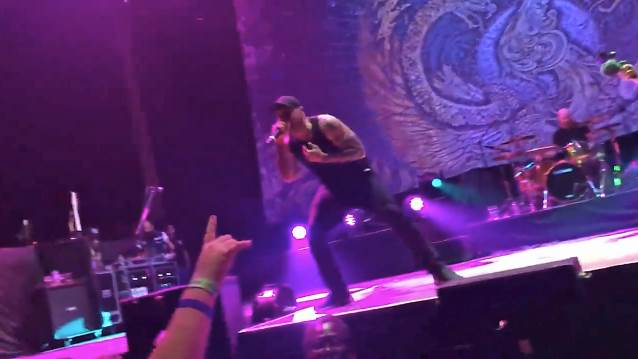 Former KILLSWITCH ENGAGE singer Howard Jones once again made an appearance during the band's concert Saturday night (August 11) at the O2 Arena in London, England, dueting with current KILLSWITCH frontman Jesse Leach on the group's classic song "The End Of Heartache". Fan-filmed video footage of the performance can be seen below. Jones previously joined KILLSWITCH ENGAGE on stage for the same song Friday night at the O2 Arena.

After Friday night's show, Leach wrote in an Instagram post: "Nothing but respect for my dude Howard. It was rad to share the stage with him tonight and hear him belt out 'End Of Heartache'! What a voice! If you haven't already, you need to check out his killer band @lightthetorchband huge sing along and heavy riffs with those soaring melodies from my man Howard! Really happy to finally become good friends and keep in touch with him after all of these years."

KILLSWITCH ENGAGE is currently touring Europe as the support act for IRON MAIDEN.

Jones is currently the frontman of LIGHT THE TORCH, which recently released its debut album, "Revival", after issuing two efforts under its previous name, DEVIL YOU KNOW.

Howard recently recorded a guest appearance on a new KILLSWITCH track, to be included on the band's next album. Leach revealed that he wrote the lyrics to the track several months ago "with Howard in mind and our connection through our similar mental illnesses." He explained: "I mean, now that I've hung with this guy a few times, it's 'crazy' (pun intended) how similar we are. We are brothers in metal, anxiety, hardcore music, love of medicinal marijuana and fighting depression.