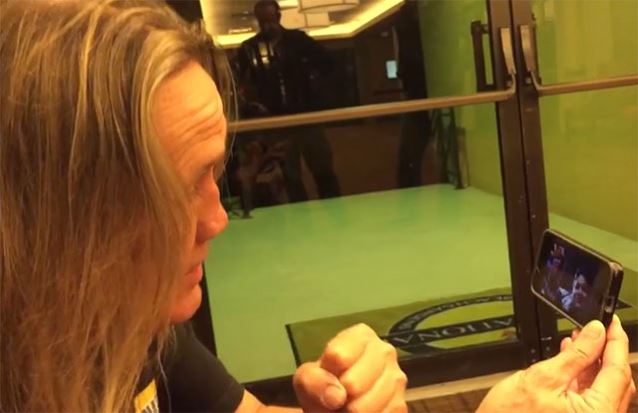 IRON MAIDEN drummer Nicko McBrain co-hosted 98.7 The Gater's "12 Guitars Of Christmas" event last week, and during the party, he snuck away for a few minutes to FaceTime with an autistic fan from North Carolina.

Paul, who has been playing drums for almost two years, is a huge fan of Nicko's drumming, and the call was a holiday dream come true.

Nicko offered up some tips and words of inspiration, saying: "There will be times when you feel despair, and what you have to do is just get through it. Sometimes your hands will hurt, your back will hurt, your legs will hurt… but persevere."

Nicko also said that next time IRON MAIDEN plays North Carolina, he will take Paul and his dad (or a really hot chick) on a tour of his drum kit!

Watch the full video below.

IRON MAIDEN's latest album, "The Book Of Souls", was released on September 4 through BMG in the U.S.A. (Parlophone Records in the rest of world).

IRON MAIDEN announced in May that touring plans to support the album wouldn't happen until 2016 to allow singer Bruce Dickinson time to fully recuperate after his successful cancer treatment.