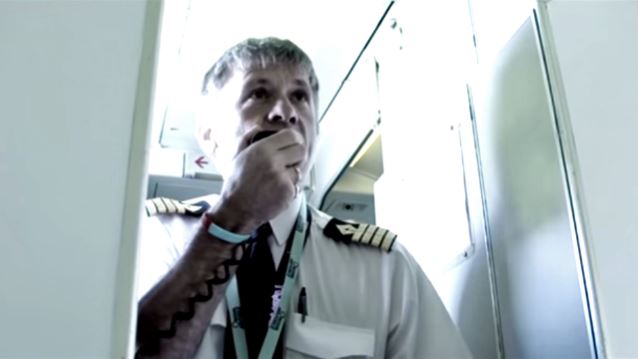 On August 26, IRON MAIDEN singer Bruce Dickinson flew 150 lucky fans out to Paris, France from Cardiff, Wales, United Kingdom onboard a chartered Boeing 737-400 plane so they could attend a listening session for the band's new album, "The Book Of Souls", at the Guillaume Tell Studios. The aircraft was in an all-white livery with small IRON MAIDEN logos on the front of the aircraft and VVB Aviation markings to the rear. It is believed to be one of the aircraft that will operate with VVB Aviation on behalf of Air Djibouti.

An eight-minute video report on the journey — courtesy of MAIDEN's official YouTube channel — can be seen below.

Dickinson, who was recently given the all-clear after being diagnosed with a tumor on his tongue late last year, told the audience at the event: "Thanks to radiation and chemicals and great doctors and support of everybody on the planet, apparently [the tumor has] disappeared. I did ask where it's gone, and the doctor looked at me and went, 'Well, the body just sort of gets rid of it,' which tends to mean they probably don't know — they don't bloody know!"

Asked by a fan if "The Book Of Souls" will turn out to IRON MAIDEN's final full-length release, Dickinson responded: "I really hope that this is not the last album. I've had way too much fun making this one. I'm gonna have way too much fun and enjoy the next tour for a variety of reasons. I'm happily chatting to you and running around and leaping around or flying airplanes. And the next stop is gonna be a tour and some singing."

"The Book Of Souls" will be released on September 4, 2015 through BMG in the U.S.A. (Parlophone Records in the rest of world).

"Whenever we do a new album, we always go out with a new stage show; that's exciting in itself," bassist Steve Harris said. "We always feel like every show is sacred these days anyway, and I suppose even more so now after the scare with what's happened with Bruce. It makes everything more important to us."