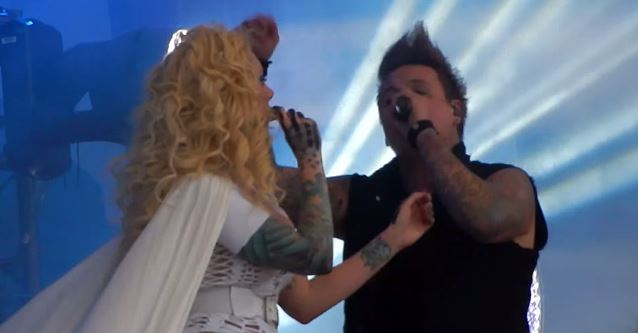 IN THIS MOMENT's Maria Brink joined PAPA ROACH on stage once again on May 22 at the Rocklahoma festival in Pryor, Oklahoma to recreate her duet with Jacoby Shaddix on the new PAPA ROACH single, "Gravity". Fan-filmed video footage of her appearance can be seen below.

PAPA ROACH recently released an official video for the song, which appears on the group's latest album, "F.E.A.R." Shaddix said about the inspiration for "Gravity": "'Gravity' is my testament to show other couples who may be going through a damaged relationship that they really can get through it. My wife is my gravity… straight up." He added in a separate interview with Loudwire: "I always want to put myself out there in the music and this song just more so than really ever. It doesn't really necessary paint me in the best picture as far as the cliché rock guy gives himself to the rock and roll excesses story. But we went through that in our relationship. I failed as a husband, as a father, as a lover, as a friend to her and I just wanted to write a song about that brokenness and how somehow she sees something in me that I didn't see in myself at times. She loved me when I couldn't love myself."

PAPA ROACH bassist Tobin Esperance told Billboard.com that Brink appeared on the track since she happened to be in the same studio while PAPA ROACH was recording "F.E.A.R." "It just worked out that we had this song," he said. "The idea came around when we got to the chorus about having a guest vocalist, and man, Maria was just perfect."

Shaddix told Loudwire: "We went into the record knowing that we wanted to have Maria on a song, we just had to decide what song it was, and we decided, band and producers, that we didn't want to have her on a song that was traditional, heavy hard rock. I think it would be cool to have her on something different. So 'Gravity' revealed itself. She came over, checked the track out, really liked it and lyrically understood the track, gets the track and wrote lyrics from my wife's perspective. She laid it down. She killed it."

PAPA ROACH and Brink will have more opportunities to perform the song when the two groups hit the road together, along with FIVE FINGER DEATH PUNCH and FROM ASHES TO NEW, starting September 4 in Lexington, Kentucky.