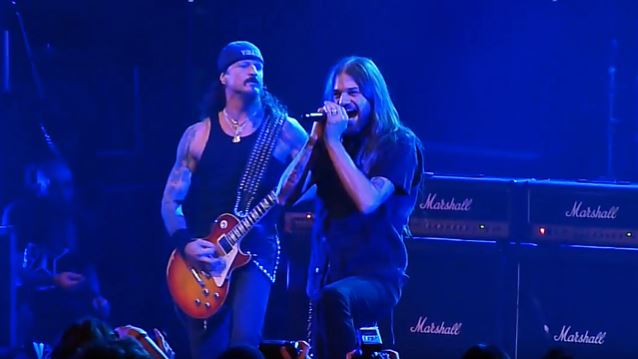 Fan-filmed video footage of ICED EARTH performing aboard the 70000 Tons Of Metal cruise, which set sail from Port Everglades in Fort Lauderdale on February 4 and returned on Monday, February 8, can be seen below.

ICED EARTH's "Something Wicked This Way Comes" and "Horror Show" were recently released on double vinyl, whereas "Days Of Purgatory" was made available on triple vinyl. This new version of "Days Of Purgatory" includes the track "Iced Earth", which was, unfortunately, omitted on the original 2LP version due to playing time issues. All three titles have been remastered for vinyl by Patrick Engel at the Temple Of Disharmony for optimal sound quality.

ICED EARTH fans can expect the next album, tentatively titled "The Judas Goat", to be released later in the year.

Schaffer stated about the band's new material: "The creative direction of the new album is rife with intense and heavy emotions, as one would expect from an ICED EARTH record, as well as a wide variety of lyrical inspirations and themes.

"I am 100 percent confident that the bond our band has forged in these last several years will shine through in the music. It's a brotherhood in every way, and the fans will feel that.

"I couldn't be more proud of these guys and everything we've achieved together.'

Longtime ICED EARTH drummer Brent Smedley will return to the band for the next recording and touring cycle. Smedley had to step down due to personal family reasons in 2013 shortly before the recording of "Plagues Of Babylon".

"We are very pleased to have Brent joining us once again; he's always been a brother and an important part of the ICED EARTH legacy," said Schaffer.

ICED EARTH 's latest album, "Plagues Of Babylon", sold around 6,300 copies in the United States in its first week of release to land at position No. 49 on The Billboard 200 chart. The CD was recorded at Principal Studios (KREATOR, IN EXTREMO, GRAVE DIGGER) in Senden, Germany and was mixed at NHow Studios in Berlin, Germany.

Jon Dette (SLAYER, TESTAMENT, ANTHRAX) sat behind the drums for ICED EARTH's last tour, taking over for Raphael Saini, who filled in during the summer 2013 festivals, the recording of ICED EARTH's most recent album, and the club leg of the VOLBEAT 2013 tour.