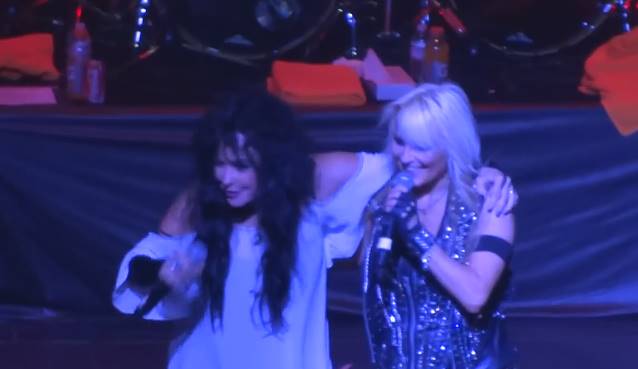 HELLION singer Ann Boleyn joined Doro Pesch as a surprise guest Monday (March 30) for Doro's encore at the Monsters Of Rock cruise. Fan-filmed video footage of her appearance can be seen below.

In honor of her 30th anniverary as a performing artist, Doro Pesch will celebrate with fans from all over the world with two separate-yet-unique shows on May 2 and May 3 at CCD Stadthalle in her hometown of Düsseldorf.

To coincide with Doro's anniversary concerts, Nuclear Blast will release "Raise Your Fist - 30 Years Anniversary-Edition", containing the re-release of the "Raise Your Fist" record and a bonus CD, "Powerful Passionate Favorites", featuring new and unreleased tracks, as well as Doro's cover versions of aongs by some of her favorite artists, such as LED ZEPPELIN, TINA TURNER, METALLICA and DIO. Another highlight is the French version of her hit "Raise Your Fist In The Air" as well as a new mix of "It Still Hurts", a duet along with MOTÖRHEAD's Lemmy Kilmister.

HELLION's 2-disc anthology titled "To Hellion And Back" was released on April 1 via the London-based HNE/Cherry Red Records.

"To Hellion And Back" chronicles the band's beginnings from 1982, to the present, and features new music from HELLION. It features a collection of fan favorites, hard-to-find recordings, and previously unreleased tracks. Among the collection are also two songs that were produced by Ronnie James Dio at the legendary Sound City recording studio. The cover artwork was designed by Italian artist Gaetano Di Falco and inspired by the photography of P.G. Brunelli.