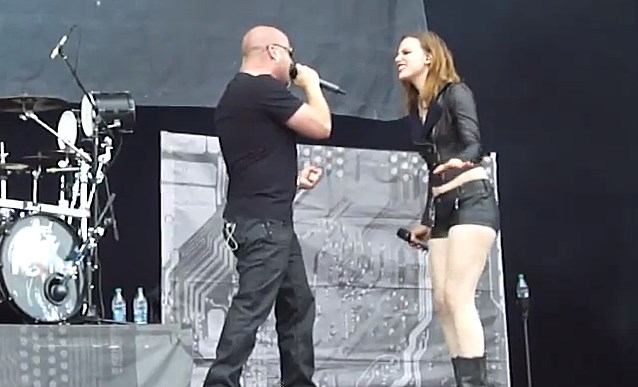 HALESTORM frontwoman Lzzy Hale joined DEVICE — the new band fronted by DISTURBED singer David Draiman — on stage this past Saturday (August 10) at the Heavy MTL festival at Parc Jean-Drapeau in Montreal, Quebec, Canada to perform a cover version of the 1988 Lita Ford/Ozzy Osbourne classic "Close My Eyes Forever". Fan-filmed video footage of the performance can be seen below.

DEVICE's self-titled debut album includes a cover of "Close My Eyes Forever", featuring guest vocals from Hale. The Pulse Of Radio asked DEVICE frontman David Draiman if he had been able to play the new version for either Lita or Ozzy yet. "Lita has heard it and she loved it," he said. "Ozzy, I have not sent to him. I only played it for Lita because she happened to be coming through town here in Austin, Texas and I went to go see her play. But I can only hope that both Ozzy and Sharon (Osbourne) love it and that they see it as what it is, which is just a tribute to the greatest heavy metal frontman of all time."

DEVICE's debut disc came out on April 9, selling 35,000 copies in its first week of release to enter the Billboard album chart at No. 11.

The live version of DEVICE, which features DOPE guitarist Virus and EVANESCENCE drummer Will Hunt in addition to Draiman, took part in this year's edition of Gigantour, the critically acclaimed package festival founded in 2005 by MEGADETH mainman Dave Mustaine. Also appearing on the bill were headliners MEGADETH, along with BLACK LABEL SOCIETY, NEWSTED, HELLYEAH and DEATH DIVISION.