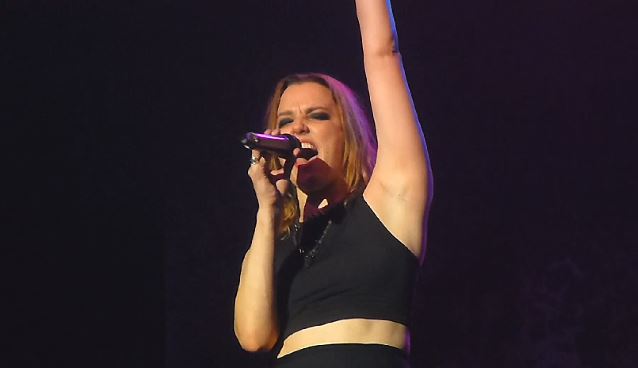 Fan-filmed video footage of HALESTORM performing a new song, "I Like I Heavy", during the band's current tour can be seen below. The track is expected to appear on HALESTORM's follow-up to 2012's Grammy-winning sophomore effort, "The Strange Case Of…", which is due in early 2015. The CD is being recorded in Nashville with producer Jay Joyce (Eric Church, CAGE THE ELEPHANT).

HALESTORM debuted two other new songs — "Heartbreaker" and "Mayhem" — at shows in Tennessee and England this past spring.

"The Strange Case Of…" yielded two chart-topping rock singles in "Freak Like Me" and the Grammy-winning "Love Bites (So Do I)" .

HALESTORM is set for a second run supporting Eric Church on his blockbuster "Outsiders World Tour". The new dates begin January 8 at New Orleans' Smoothie King Center and then continue through early February. The "Outsiders World Tour" carries on the phenomenal pairing of HALESTORM and Eric Church, a collaboration begun when the country superstar teamed with HALESTORM frontwoman Lzzy Hale for a show-stopping duet performance of his hit single "That's Damn Rock & Roll" on this summer's 2014 "CMT Music Awards". HALESTORM will next join forces with Church and the acclaimed "Outsiders World Tour" on November 20 at Green Bay's Resch Center, with dates scheduled through mid-December.

In other news, HALESTORM will release a vinyl edition of both of their previously released covers EPs. "ReAniMate: The CoVeRs Collection (2011-2014)" will be available on December 2 via the band's webstore.