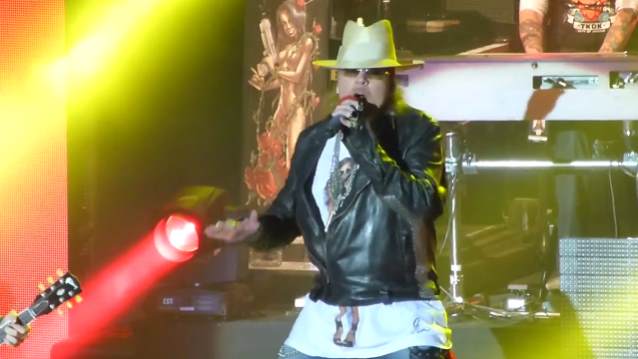 With dozens of bands congregating on Columbus, Ohio this weekend for the annual Rock On The Range festival, one of the event's headliners, GUNS N' ROSES, played a warm-up gig on Tuesday night (May 13) in Bethlehem, Pennsylvania. According to The Pulse Of Radio, the Axl Rose-led act broke out a slew of cover tunes during the 26-song show, including THE WHO's "The Seeker", the NEW YORK DOLLS' "Chatterbox" and a jam version of LED ZEPPELIN's "Babe I'm Gonna Leave You".

The show also included the regular GUNS versions of WINGS' "Live And Let Die" and BOB DYLAN's "Knockin' On Heaven's Door", along with GUNS favorites like "Welcome To The Jungle", "Mr. Brownstone", "Sweet Child O’ Mine", "Paradise City" and others.

In his review of Tuesday's concert, Dustin Schoof of The Express-Times wrote: "It wasn't really GUNS N' ROSES so much as it was GUNS N' ROSES doing their best GUNS N' ROSES impersonation at the Sands Bethlehem Event Center.

"The band's three lead/rhythm guitarists each made it clear they are more than capable of handling — and mimicking — the riffs originally made famous by former, and founding, members Slash and Izzy Stradlin. Current guitarists DJ Ashba, Ron 'Bumblefoot' Thal and Richard Fortus are extremely talented in their own right. But their interpretations of the well-known leads and solos often became lost in self-indulging and excessive variations.

"The original — or 'classic' — GUNS N' ROSES lineup of Rose, Slash, Stradlin, Duff McKagan and Steven Adler was rough around the edges. But that is also what gave the band its appeal and allure. They were a rock 'n' roll locomotive that seemed to constantly teeter on the brink of derailment. This latest GUNS N' ROSES configuration tried their best to emulate that vibe. But Tuesday's performance lacked the same fluidity and controlled chaos."

Fan-filmed video footage of the Bethlehem concert can be seen below.

GUNS will headline Rock On The Range on Friday night (May 16) before heading to Las Vegas to begin a residency.

There hasn't been a new GUNS N' ROSES record in over five years, since the 2008 release of "Chinese Democracy", and longstanding keyboardist Dizzy Reed told The Pulse Of Radio a while back that a follow-up didn't look likely to happen soon. "We haven't really talked a lot about that," he said. "We recorded a lot of material back, you know, when we started working on 'Chinese Democracy', so there's a quite a bit of unreleased stuff, I think, that would be really cool to be finished and put out. Everyone has great ideas and we're always sort of bouncing stuff off each other and I think eventually something's got to give, you know, and it's gonna come out."

Singer Axl Rose, the sole original member of the band, has said he would like to put out a new record, but has not offered any concrete details beyond that.

Last year, guitarist Ron "Bumblefoot" Thal expressed some frustration at the lack of any progress on making a new GUNS N' ROSES album.

Not all the members of the current lineup played on "Chinese Democracy", which took 13 years to complete. 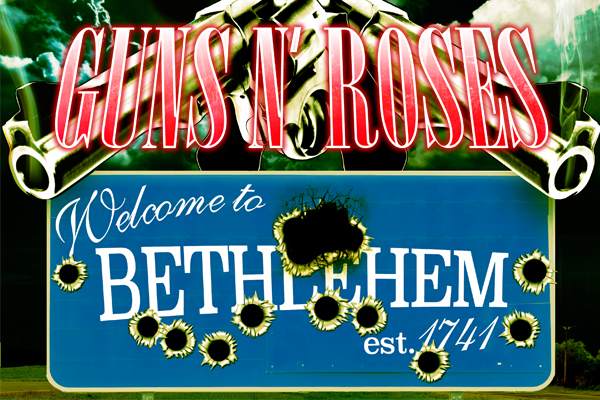