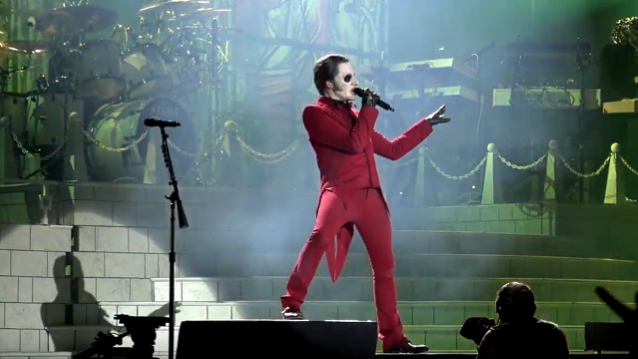 Fan-filmed video footage of GHOST's July 27 performance at the Heavy Montreal festival in Montreal, Quebec, Canada can be seen below.

GHOST recently scored the third consecutive Top 10 single from its Grammy-nominated album "Prequelle", with "Faith" claiming the No. 10 spot this week at Active Rock Radio. "Faith" joined the album's first two singles, "Rats" and "Dance Macabre", both of which went all the way to the No. 1 spot on the chart, with "Rats" steadfast at No. 1 for a record-setting eight consecutive weeks.

GHOST's "Ultimate Tour Named Death" North American headline arena tour starts on September 13 in Bakersfield, California and will see an expanded theatrical production, a striking stage set resembling a medieval cathedral with a backdrop of illuminated stained-glass windows. In addition to rich costumes, special effects, and a spectacular light show tailor-made for arenas, the Cardinal, the Ghouls and the Ghoulettes will take advantage of series of multi-level platforms and walkways to prowl around on while performing some of GHOST's fan-favorite songs from the band's albums and EPs catalogs.

GHOST leader Tobias Forge recently confirmed to Ireland's Overdrive that he is planning on entering the studio in early 2020 to begin work on the follow-up to "Prequelle".