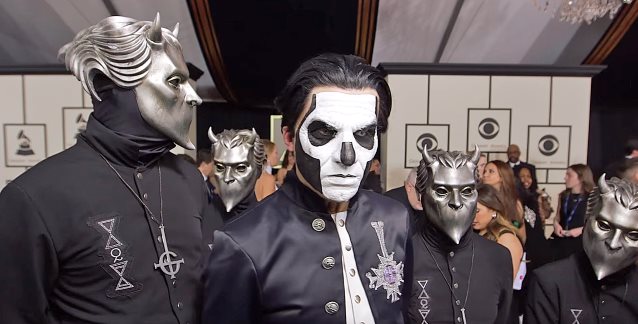 Swedish occult rockers GHOST were interviewed by Billboard magazine on the red carpet of this year's Grammy Awards, held Monday night (February 15) at the Staples Center in Los Angeles. You can watch the chat below.

In his brief acceptance speech, GHOST frontman Papa Emeritus III said, "Hello. We are GHOST. Thank you so much for this. This is a big, big thing for us, obviously. And, you know, a nightmare has just turned into a dream. So thank you all for that. Thank you, everybody involved, and thank you for voting. Now go party."

GHOST will return to the U.S. this spring for a headlining tour that kicks off in Montclair, New Jersey on April 13, wrapping up on May 22 in Albany, New York.