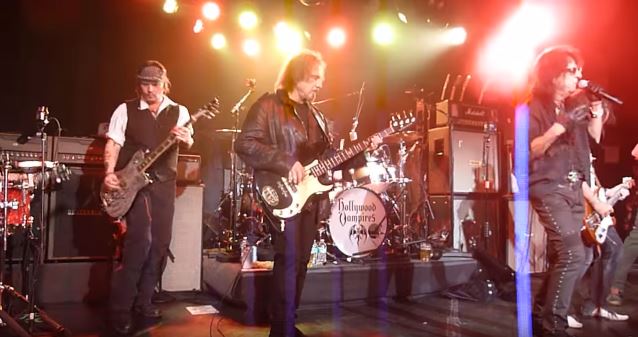 Geezer Butler (BLACK SABBATH), Tom Morello (RAGE AGAINST THE MACHINE), Perry Farrell (JANE'S ADDICTION) and pop superstar Kesha are among the guest musicians who performed with HOLLYWOOD VAMPIRES during the band's live debut Wednesday night (September 16) at the 500-capacity The Roxy Theatre in West Hollywood, California.

Butler and Morello got up on stage for Jimi Hendrix's "Manic Depression", while Farrell took on lead vocals for Harry Nilsson's "Jump Into The Fire". Kesha stepped up for a version of LED ZEPPELIN's "Whole Lotta Love", before re-emerging later — along with Morello and Farrell — for Cooper's "School's Out" mashed up with PINK FLOYD's "Another Brick In The Wall".

The HOLLYWOOD VAMPIRES' album was released on September 11. The self-titled set, which was produced by Bob Ezrin, features appearances by Paul McCartney, Brian Johnson, Joe Walsh, Zak Starkey, Perry Farrell, Dave Grohl, Slash, Robbie Krieger, and Kip Winger, among others. All artist proceeds will be donated to MusiCares.

Perry told The Pulse Of Radio that he's looking forward to HOLLYWOOD VAMPIRES growing into a solid working live outfit. "I'm an East Coast guy, y'know. I mean, everybody else is kinda like, West Coast, or… So, to spend all the time in L.A. and to be part of this, it's a real gas. And I know it's something that Johnny's wanted to do for a long time, actually have a band, y'know? And, y'know, we're gonna put a lot of time into the rehearsals, so it won't take anything but bring your guitar and show up."

The HOLLYWOOD VAMPIRES project is a salute to Alice Cooper's hard-partying L.A. crew in 1973-1974, which included Keith Moon, John Lennon, Ringo Starr, Harry Nilsson and Micky Dolenz, among others. A plank of wood featuring the legendary musicians' signatures is immortalized at Hollywood's Rainbow Bar And Grill in the club's upper level, known as "Over The Rainbow."