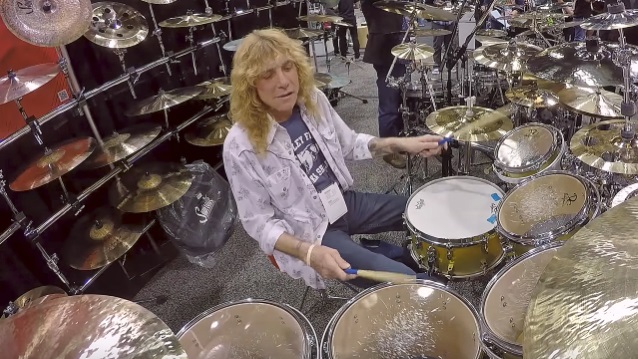 Video footage of former GUNS N' ROSES drummer Steven Adler rocking out behind a drum kit at the Soultone stand during this year's NAMM show in Anaheim, California can be seen below.

As previously reported, Steven has revived his ADLER'S APPETITE band and is planning to embark on a tour celebrating the 30th anniversary of GN'R's classic debut album, "Appetite For Destruction". He is expected to play the landmark LP in its entirety "plus other GN'R classics."

In a February 2017 interview with the "One On One With Mitch Lafon" podcast, Adler said that he wasn't interested in making any more albums with his namesake band (ADLER), which released an acclaimed debut, "Back From The Dead", in 2012. "Rock and roll doesn't sell," he said at the time. "Unless I get into a band that's already established, there's no point in doing it, dude. It's such a pain in the ass to fly all over the world, and you play little clubs or bars… Dude, I am so tired of driving up to the gig and going… I have pair of dice in my hand and I go, 'C'mon, seven. Let there be people here. C'mon!' I walk in and I go, 'Fuck! There's twenty people.' It's not the same. So unless I get in an established band, there's no point in doing it. There's no money. And my whole goal is to play for as many people as possible. Don't get me wrong — I love and appreciate playing for that one or ten or hundred people. I was thankful. But I wanna do it right."

Adler published an autobiography in 2010, titled "My Appetite for Destruction: Sex, And Drugs, And Guns N' Roses", in which he delved into his depression, suicide attempts, drug-related heart attacks, and the debilitating stroke that left him with muscular paralysis and permanently slurred speech.

Although not part of the reunion that launched in 2016, Adler rejoined GUNS N' ROSES at several shows on the band's "Not In This Lifetime" tour, including three stops on the U.S. leg and one gig in Buenos Aires, Argentina, playing drums on "Out Ta Get Me" and "My Michelle".