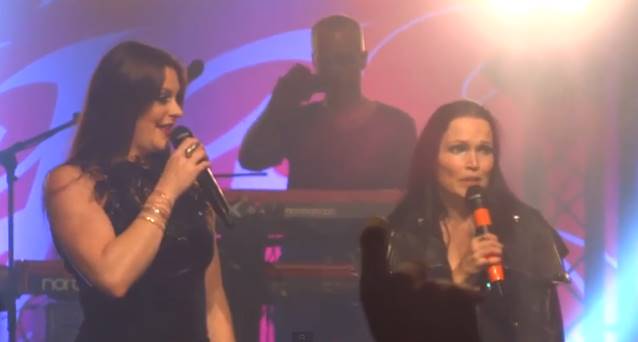 Former NIGHTWISH singer Tarja Turunen performed a duet with the band's current vocalist Floor Jansen (REVAMP, ex-AFTER FOREVER) Sunday night (October 20) at this year's edition of the Metal Female Voices Fest at Oktoberhallen in Wieze, Belgium. The women joined forces on a cover version of "Over The Hills And Far Away", originally written and recorded by the Northern Irish singer and guitarist Gary Moore and previously covered by NIGHTWISH on the 2001 EP of the same name. Fan-filmed video footage of the performance can be seen below.

On October 9, Jansen and English composer and multi-instrumentalist Troy Donockley (uilleann pipes, low whistles, vocals) were officially added to NIGHTWISH's permanent lineup. The band explained in a statement: "Originally we were going to wait until 2014 to make a decision about the future lineup of the band, but the past year has clearly shown us that Floor and Troy are perfect matching pieces to our puzzle, and we are really grateful of the bond that has grown between all of us."

Asked about the reasons for Olzon's sudden exit from the group, NIGHTWISH keyboardist/mainman Tuomas Holopainen told U.K.'s Metal Hammer magazine: "I'm sure it came as a shock to everybody. We came out with a statement [regarding the split], which pretty much says it all. It still is a private matter, and that's all we wanna say about it, like, ever. It was an amicable divorce, so to say, and made in good spirit, and we are just looking to the future. There really is no reason to go back into all the details and all that. I mean, this is not politics, this is a rock band."