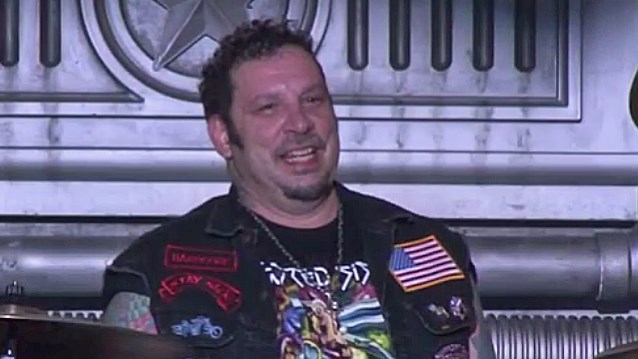 Fan-filmed video footage of TWISTED SISTER drummer A.J. Pero's final performance with ADRENALINE MOB, which took place this past Thursday night, March 19 in Baltimore, Maryland as the support act for DROWNING POOL, can be seen below.

A review of the concert can be found on the Rock N Roll Experience web site.

According to the Associated Press, Pero was on tour with ADRENALINE MOB when members of that group were unable to rouse him on their bus Friday morning. He was taken to a hospital in Poughkeepsie, New York, where he died of an apparent heart attack.

"Our beloved brother A.J. Pero peacefully passed away in his sleep [Friday] morning on the bus.

ADRENALINE MOB guitarist Mike Orlando said: "Here it goes... Not sure how to make sense of this, but one of my dearest friends for almost 20 years passed away [Friday] morning while we were on tour. He passed away peacefully in his sleep on the bus. A.J. Pero was one of the kindest, most caring and giving souls I've ever known! I have shared the stage with him on and off for almost two decades. It was nothing short of a true honor to not only have called him my bandmate, but one of my dearest friends! I will never forget you, buddy. I love you, brother! Rest in peace, my dear friend. You are a true legend!!!!"