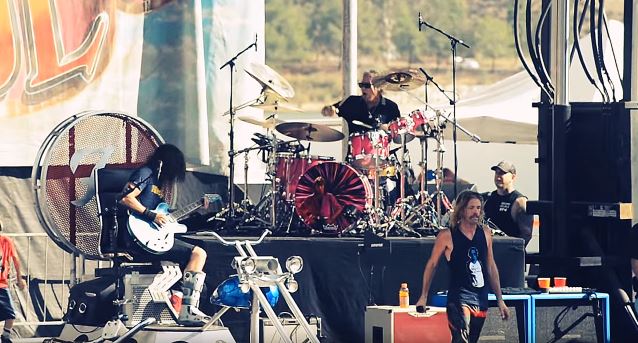 RATT drummer Bobby Blotzer joined FOO FIGHTERS on stage this past Sanday, October 18 at the 32nd "Grand Finale" Love Ride at Castaic Lake, California to perform the QUEEN classic "Tie Your Mother Down". Video footage of his appearance can be seen below.

Said Blotzer: "I was happy to be invited out to see my longtime friends FOO FIGHTERS at Sunday's annual Love Ride in Castaic, California. They are truly one of the five-star bands around and it was especially cool to be invited up to jam with them. They told me they had seen the new YouTube videos of RATT and that they thought it sounded great. I told Dave [Grohl] and Taylor [Hawkins] that we would love to do some dates with them."

RATT guitarist Warren DeMartini filed a lawsuit last month against Blotzer, claiming that the drummer is falsely advertising his "tribute band" as the real thing.

WBS, Inc., the company which manages the business and operations related to RATT, was originally formed by Blotzer, DeMartini and singer Stephen Pearcy. Pearcy lost his share of the name in court after splitting with the group in 2000. He returned to the band in 2006 but exited again last year. Blotzer has since expressed his desire to keep RATT alive with a new singer, but explained that DeMartini did not want to tour as RATT without Pearcy.

"I was happy to be invited out to see my long time friends Foo Fighters at Sunday's annual Love Ride in Castaic, California. They are truly one of the five star bands around and it was especially cool to be invited up to jam with them. They told me they had seen the new YouTube videos of RATT and that they thought it sounded great. I told Dave & Taylor that we would love to do some dates with them. Enjoy this cell phone video"BB