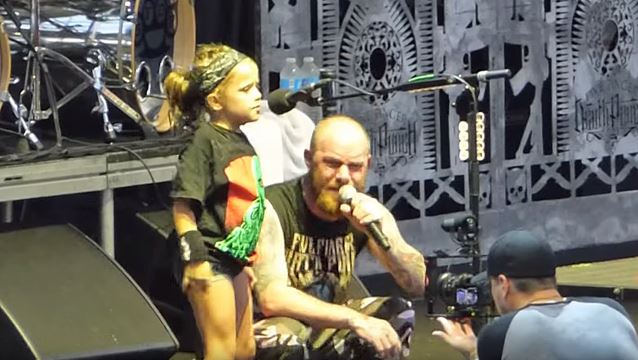 A young girl joined FIVE FINGER DEATH PUNCH on stage this past Sunday, July 17 at the Chicago Open Air festival in Bridgeview, Illinois to sing the band's song "The Bleeding".

FIVE FINGER DEATH PUNCH later made a Facebook post about her appearance, writing: "This little girl was in the first row singing every word, so Ivan [Moody, FIVE FINGER DEATH PUNCH singer] brought her on stage. She sang 'The Bleeding' with us. Wow— future rockstarlet in the making. She didn't even blink. Brave little thing performed front of 30,000."

FIVE FINGER DEATH PUNCH is working on material for the follow-up to last year's "Got Your Six" album for a tentative 2017 release.

FIVE FINGER DEATH PUNCH's first album with Rise Records, the BMG-owned rock label, will be made available following the completion of the band's obligation to its current label, Prospect Park.

This little girl was in the first row - singing every word - so Ivan brought her on stage. She sang the "Bleeding" with...