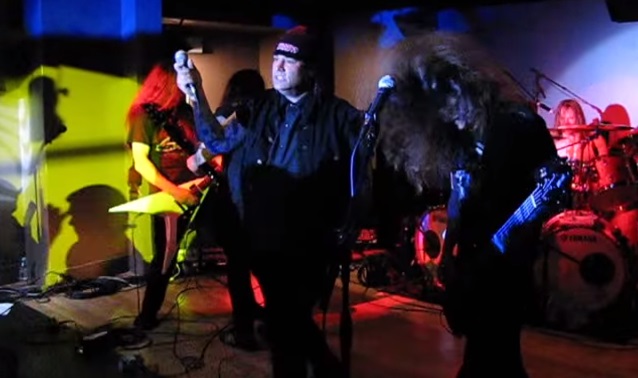 This special EXODUS performance was highlighted by Hammett joining the band on stage for a few songs.

Fan-filmed video footage of the "Children Of A Worthless God" performance from Friday night's EXODUS show can be seen below.

"Children Of A Worthless God" comes off the "The Atrocity Exhibition... Exhibit A" album, which was released in 2007.

"Fear FestEvil After Party" marked EXODUS' third show with singer Steve "Zetro" Souza since he rejoined the band two months ago; EXODUS played on July 11 at the Bang Your Head!!!festival in Balingen, Germany and on July 12 at Antwerp Metal Fest in Antwerp, Belgium.

Asked if he was planning to perform any of the songs from the Rob Dukes era of EXODUS, Souza told Metal Insider: "I'm going to, yes, definitely. Why wouldn't we? The songs are great. I didn't want to shun that at all. It was a big part of their history as well; it was nine years and three records. You can't just turn away that. Why would I? No way, I welcomed it on. I wanted to sing some of those songs. They're great songs."

EXODUS will release their new album, "Blood In, Blood Out", on October 14 via Nuclear Blast. The album art was illustrated by Swedish artist Pär Olofsson, known worldwide for his incredible renderings that have graced the covers of countless heavy metal albums, including EXODUS' "Let There Be Blood".

The concept for the art was impressively envisaged by Olofsson based on the album title alone, as guitarist Gary Holt explains: "The concept came from Pär Olofsson. I fed him the title and he immediately came up with the final concept, and it's perfect! One of my favorite covers we've ever done and it fits the title and theme to a T!"

"Blood In, Blood Out" will feature a guest appearance by METALLICA guitarist Kirk Hammett on the song "Salt In The Wound". "It felt really casual, really cool — just like it did back in 1980 when we were all just hanging out back in the day," Hammett told RollingStone.com. "Me, recording a solo on their album was a huge thing for me. Other than the EXODUS demo that's been heard by a lot of people, it's the only time I ever recorded with EXODUS. It was a huge thing for me."