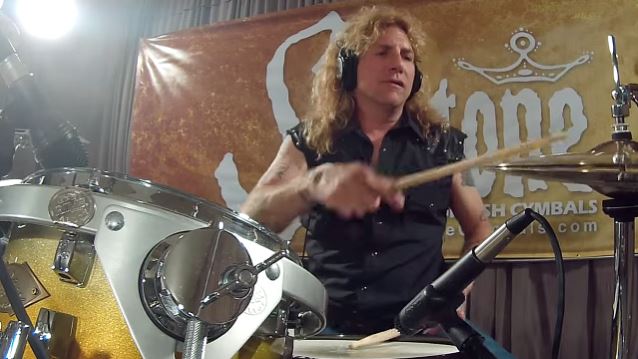 In a recent interview with "The Trap Set", Adler stated about the possibility of a reunion of the classic GUNS N' ROSES lineup: "If we do ever do a reunion — a reunion show or a tour — I would be very excited, 'cause I love those guys. I just hope nobody would hate anybody. Time is supposed to heal all wounds. And it's been 25 years… It's been 27 years… Shit… C'mon! Let's move on! Let's do something for the people!"

Asked what is keeping the reunion of the classic lineup of GUNS N' ROSES from happening, Adler responded: "I think Axl [Rose, vocals] has his grudge, I think, with [guitarist] Slash, and I wish he would just move on. 'Cause Slash is a wonderful person, and Axl is a wonderful person. And they're both so talented, and together they're just so great."

Slash and Axl have reportedly not spoken since Slash left the band 19 years ago. Rose said in a 2009 interview with Billboard, "What's clear is that one of the two of us will die before a reunion and however sad, ugly or unfortunate anyone views it, it is how it is."

Slash last year told the Irish Examiner that he blames the media for causing "unnecessary conflict" between him and the other members of GUNS N' ROSES. Slash explained "I'm not bored with the fascination with [GUNS N' ROSES]. What I'm bored with is all the brouhaha with stuff the media have no idea what they are talking about... the causing of unnecessary conflict between the original members. It's just a lot of drama and sensationalism — everyone is trying to capitalize on that. I'm sick of it."

GUNS N' ROSES was inducted into the Rock And Roll Hall Of Fame in 2012. Slash, bassist Duff McKagan and Adler attended the ceremony, while Axl and founding guitarist Izzy Stradlin stayed home.