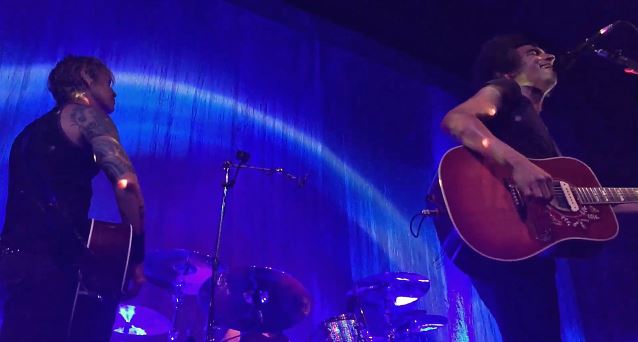 Duff McKagan (GUNS N' ROSES, VELVET REVOLVER) joined ALICE IN CHAINS on stage on July 22 at the Knitting Factory in Spokane, Washington to perform two songs, "Nutshell" and "Man In The Box". Fan-filmed video footage of his appearance can be seen below.

According to The Pulse Of Radio, McKagan is likely to write the official biography for ALICE IN CHAINS. McKagan, the author of two books already, revealed in an interview with "Louder Than Hell" co-author Katherine Turman that he was in talks with the band about penning their story. McKagan explained where the project stands. "I talked to Sean [Kinney, ALICE IN CHAINS drummer]," he said. "We talked at length. Like, 'If you want me to do it, now's the time, 'cause I'm done with this book. I'll have this summer that I can start on it, you guys are working on music, you can put your record out, put the book out…' Like, make it a whole thing. I'm a proponent of that band, I think it's just a victorious story."

McKagan's new book, "How To Be A Man (And Other Illusions)", came out on May 12 via Da Capo Press. The bassist released a three-song EP, also called "How To Be A Man", in conjunction with the book's publication. The title track featured former GUNS guitarist Izzy Stradlin and ALICE IN CHAINS axeman Jerry Cantrell.

McKagan has also written for Seattle Weekly and played with ALICE IN CHAINS on their 2006 comeback tour.

ALICE IN CHAINS has been keeping a low profile lately but a new album is expected out sometime later this year.