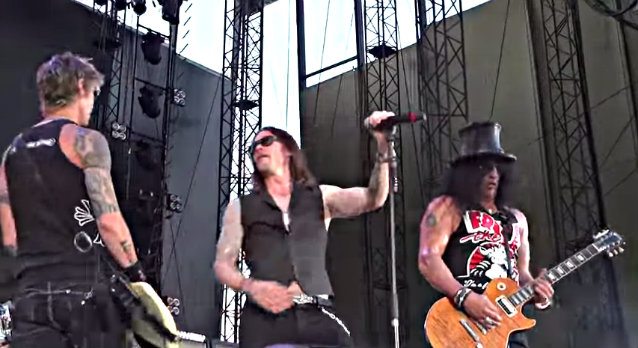 Bassist Duff McKagan joined his former GUNS N' ROSES bandmate Slash and the guitarist's backing band, MYLES KENNEDY & THE CONSPIRATORS, on stage on August 16 in Gorge, Washington to perform the GN'R classic "It's So Easy". Fan-filmed video footage of Duff's appearance can be seen below.

Asked if he ever wonders about what would have happened if the original GUNS N' ROSES had stayed together, Slash said: "I don't think about that because that's not what happened, so what's the point? People are always like, 'What if you had done things differently?' Not only with GN'R. But it's just such a waste of time. Things happened and it's done. I sort of loathe looking back and fantasizing about anything one way or another because in the end it didn't happen."

Former GUNS N' ROSES drummer Matt Sorum recently told Radio.com that he was "cool" with McKagan's reunion with Rose. "Duff's like a really consummate gentleman, he's always been the mediator," Matt said. "I think he got caught in the middle of all the other stuff. So for him to mend fences [with Axl], it was cool. It's time. Rather than sitting around and saying 'What if?' He was really cool about it, he sent us all e-mails. It was nice, it felt cool, it felt right."

Asked if he would play with the current version of GUNS N' ROSES if Axl called him to do it, Sorum replied: "Yeah, sure. I got no problems with any of that, you know? Life's too short. It's getting shorter too."

Slash recently told DailyStar.co.uk about Duff's reunion with Axl: "It really isn't that big a deal. Duff told me he was going to fill in for what's his name."

He added: "It's a different dynamic than my relationship with GUNS or Axl. I don't let them worry me."

Slash told TeamRock that he bears no ill will toward McKagan for doing the aforementioned GN'R shows, saying, "I don't judge Duff. He's cool. He just has a way more amicable, neutral relationship with Axl than I do."

Slash told The Pulse Of Radio awhile back how his relationship with Rose disintegrated during the final years of the original GUNS lineup. "His sort of m.o., as far as the band was concerned, over time got so exaggerated in the rock star sense or whatever and he became such a dictator and this and that and the other, that it was impossible for me to work with him, because I'm not the kind of person that takes orders, you know," he said.