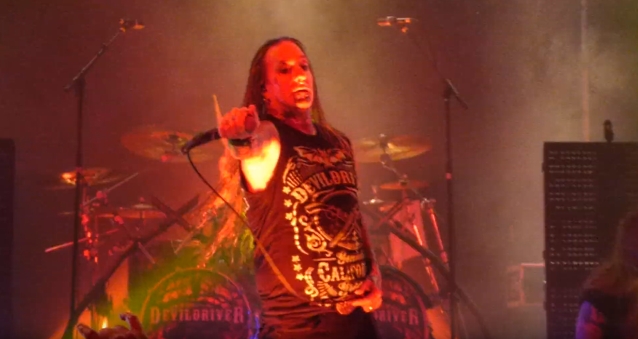 Fan-filmed video footage of DEVILDRIVER performing a cover of COAL CHAMBER's "Loco" on June 23 at Aztec Theatre in San Antonio, Texas can be seen below.

Earlier this year, DEVILDRIVER frontman Dez Fafara said that the band's co-headlining tour with STATIC-X would see his outfit performing material from COAL CHAMBER, the band that put him on the musical map and gave him his first and only gold-certified album in the shape of the group's 1997 debut.

COAL CHAMBER existed for ten years before disbanding in 2003 to pursue other musical projects. They reunited in 2011 for touring purposes but it wasn't until 2014 that the band began work on a new studio album of original material, 2015's critically acclaimed "Rivals". Several months of touring activity followed before Dez returned to DEVILDRIVER to make a new record, 2016's "Trust No One".

In January, Fafara took to Twitter to confirm that DEVILDRIVER would finally start playing songs from COAL CHAMBER during its live set on the STATIC-X tour.

He wrote (edited for clarity): "So, yes, for the first time ever DEVILDRIVER is playing a bunch of COAL CHAMBER songs, and when you hear this shit with double kick and two guitars, there's no going back — trust that! I waited years and tried to keep 'em separate, but it's time for me to embrace all that I am as a singer.

"I might also add that unlike other cats like [Rob] Zombie, etc., when I left COAL CHAMBER, I never hung my hat on playing those songs with DEVILDRIVER. In hindsight, and as I waited for things to reform, it was a mistake and apologies to all who waited almost 20 years for one short-lived COAL CHAMBER run and record, so here I go into the future embracing all that's ever been me as a vocalist. [Keep] in mind this will ONLY BE SELECT SHOWS, so I would get tickets fast as I'm seeing already tons of venues are gonna sell out!

"There's times you fucking lay in bed and go, 'When is the right time?' And that's for anything. Or what if someone passes away, etc.? then what then when. And that pertains to everything as well, so I thought it out and talked it out.

"COAL CHAMBER MUSIC is YOURS, not mine, so why wait, why hold people off, why make people wait, the older generation, the new generation that want to hear [COAL CHAMBER] songs sung by the guy who fucking recorded 'em.