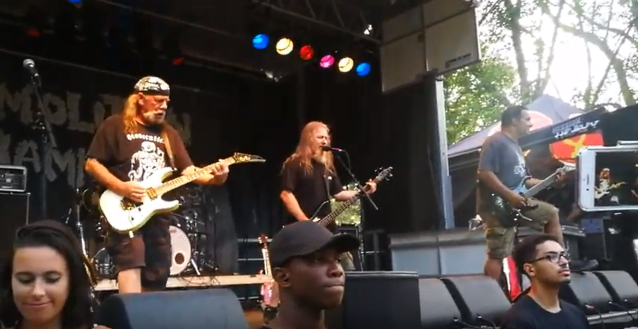 Asked how the DEMOLITION HAMMER reunion came about, guitarist Derek Sykes told Rock Hard magazine: "It's kind of something that we've been watching, or I've been watching, for a very long time. Our last show that we played, up until recently, was [more than] 25 years ago. I've kind of maintained web sites and things like that, and I've been just kind of listening to people talking about the band, and they started talking more and more and more and more. And I had the idea, went to Steve [Reynolds; bass/vocals] and said, 'Hey, what do you think? Maybe we [should] try it.' And he was, like, 'I don't know.' So it really just kind of sat for a while and I just sat in awe, looking at how many people were kind of into it. I didn't expect that at all. And then we reconnected with Jim [James Reilly, guitar] here, and it was great just all three of us hanging out and really just having a great time. And then we went to the Maryland Deathfest [in 2015]. And our friends' band SOLSTICE played one of our songs, and we saw the crowd went nuts, and that's really when it hit us: 'Holy shit! We can actually do this.' So we dusted off the guitars, dusted off our arms, and tried to re-learn stuff that we hadn't literally played in twenty years. And we got most of it right."