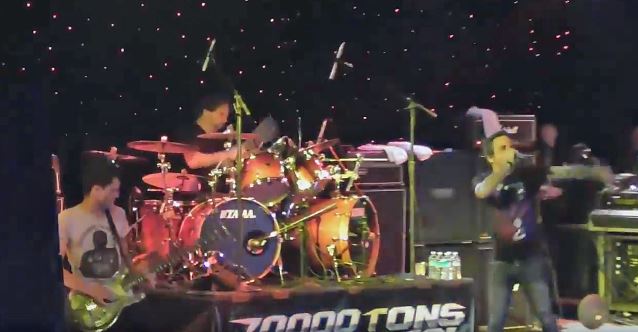 Fan-filmed video footage of DEAD CROSS performing aboard the 70000 Tons Of Metal cruise, which set sail from Port Everglades in Fort Lauderdale on February 4 and returned on Monday, February 8, can be seen below.

DEAD CROSS is the new "punk" outfit featuring former SLAYER and PHILM drummer Dave Lombardo alongside members of THE LOCUST and RETOX.

Lombardo described DEAD CROSS's sound to Noisey: "It's just straightforward brutal punk— metal-esque, but it's definitely not metal. I think it definitely leans more towards the punk style, because I feel that the way things are in the world, a punk attitude is definitely necessary to help you along with the shit that's going on. There's no time to sing 'We Are the World' or all this bullshit, we're all pissed right now, and there's no better way to release anger than to be in a punk band and write punk music."

Regarding DEAD CROSS's recording plans, Lombardo told Noisey: "The level of musicianship we have is very high, so I don't think it'll be too much of a problem to create music and put something out. These guys are driven like I am. I've learned a lot from being in this industry, and sometimes it's a lot better when you grab the bull by the horns yourself and don't wait around for other people."