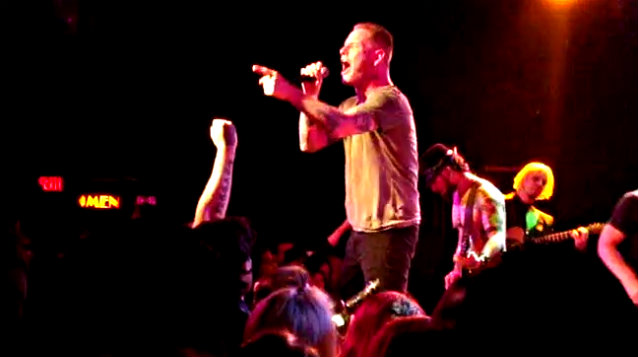 CAMP FREDDY brought in the New Year at the world-famous The Roxy Theatre in West Hollywood, California this past Tuesday night (December 31) with a show that featured SLIPKNOT and STONE SOUR singer Corey Taylor belting out classic songs from AEROSMITH, VAN HALEN, STONE TEMPE PILOTS and ALICE COOPER. Fan-filmed video footage of his appearance can be viewed below.

Taylor's recently published book, "A Funny Thing Happened On The Way To Heaven (Or, How I Made Peace With The Paranormal And Stigmatized Zealots And Cynics In The Process)", chronicles Taylor's experiences with the paranormal and his quest to find an explanation for such incidents.

"A Funny Thing Happened On The Way To Heaven" landed at No. 23 on the New York Times "Hardcover Non-fiction" best sellers list, three positions higher than his first memoir, 2011's "Seven Deadly Sins".

Taylor posted a message on Twitter on December 29, dispelling rumors that SLIPKNOT is finished following the departure of drummer and founding member Joey Jordison.

Ironically, Taylor himself has often been cited as the member of the band most responsible for the delays in making a new album, as he wrote, recorded and toured three full records with STONE SOUR in the past three years.

SLIPKNOT bassist Paul Gray, also a key songwriting in the band, died in May 2010. The band's last album was 2008's "All Hope Is Gone".

SLIPKNOT is slated to begin work on a new album later this month.