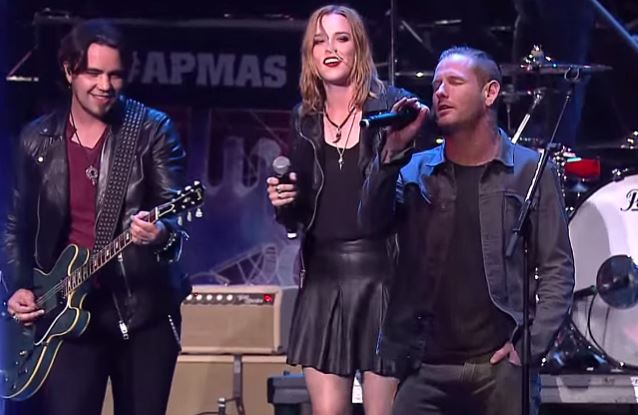 SLIPKNOT and STONE SOUR frontman Corey Taylor joined HALESTORM on stage at last night's (Wednesday, July 22) second edition of the Alternative Press Music Awards at Quicken Loans Arena in Cleveland, Ohio to perform a cover version of TEMPLE OF THE DOG's "Hunger Strike". Video footage of the collaboration can be seen below.

Taylor released his third book, "You're Making Me Hate You: A Cantankerous Look At The Common Misconception That Humans Have Any Common Sense Left", on July 7 via Da Capo Press, a member of the Perseus Books Group. The book acts as a commentary on society and pop culture and has been described as "Taylor's take on Peter Griffin's 'You Know What Really Grinds My Gears'."

HALESTORM's third album, "Into The Wild Life", was released on April 14. Singer Lzzy Hale told The Pulse Of Radio that making the record was a satisfying experience for her and the band. "It was a lot of fun," she said. "It was such a freeing process 'cause it really didn't feel like we were — 'we're recording an album now, guys!' It just — we were in this big, overhauled church, you know, so it didn't feel like we were in a studio and there was just every instrument everywhere. There was a piano and everything was all set up so it's like, whatever you wanted to do, you could just do."