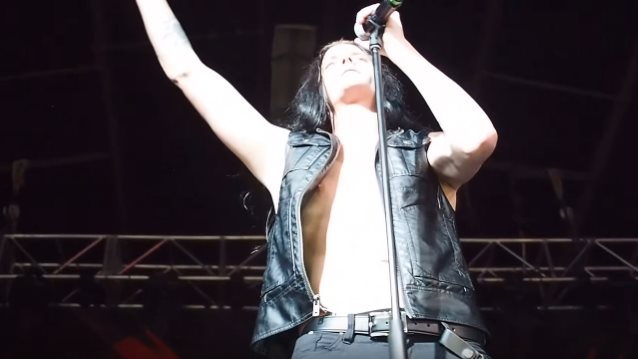 Fan-filmed video footage of Bobby Blotzer's RATT performing on December 9 at Azteca Music Hall in Amarillo, Texas can be seen below.

Blotzer earlier in the month refuted Warren DeMartini's claim that the drummer has been expelled from the RATT partnership and therefore no longer has an interest in the band's name.

At the end of last month, three members of RATT's classic lineup — DeMartini, singer Stephen Pearcy and bassist Juan Croucier — issued a press release claiming that they had taken control of the band's name after a judge ruled against Blotzer with respect to whether Croucier had committed trademark infringement by using the RATT name and logo to advertise his band RATT'S JUAN CROUCIER back in the fall 2015. The judge furthermore decided that the corporation WBS, Inc., of which Blotzer and DeMartini were thought to be the sole shareholders, and which Blotzer had claimed owns the RATT name and brand, did not have ownership interest in the RATT marks and that the name and brand was still owned by the members who were part of the original RATT partnership agreement: Pearcy, Croucier, DeMartini and Blotzer.

On December 3, Blotzer — who has been touring the U.S. for the last year with his own version of RATT, featuring a rotating cast of musicians, including vocalist Josh Alan (ex-SIN CITY SINNERS) — and his attorney Drew Sherman addressed the latest legal developments in the RATT camp during an interview with the "One On One With Mitch Lafon" podcast (Facebook page).

Insisting that his current band is still called RATT because "there is nothing else to call it," Blotzer said that he "made the decision as half owner of the [RATT] name" to start playing live shows as RATT without any other members of the band's classic lineup. He explained: "WBS owns the name. I'm 50% of WBS, Inc. and still am. WBS, Inc. still owns that name right this moment. That's not changed.

"We've had tremendous, great success with this band out here," Blotzer said, referring to his current version of RATT. "I mean, we're headlining big gigs. It's doing really well. I'm very proud of that. So I think [Warren, Juan and Stephen] seeing this kind of success, now all of a sudden, from not liking each other or talking, [they're now in] collusion together and they decide that they're gonna do this at this point, and there you have it. They're making their move, and they don't have the name RATT."

Asked if his decision to change the name of his new band from BOBBY BLOTZER'S RATT EXPERIENCE to simply RATT was an attempt to boost the group's marquee value or something else, the drummer said: "Well, there's a little bit of both of that in there. The band was so good that I wanted to bring it to bigger venues to people. And the way to do that was, obviously, to use what was mine. And that was half of that name. I called Warren, and, of course, he wouldn't answer the phone; I can't e-mail him. We have this corporation, but yet I can't even get in touch with him, so I was getting in touch with him through our old manager. And I'm saying, 'Listen, dude, have you heard this thing that I'm doing? Because I'm gonna take it out. I wanna play bigger gigs, and I'm taking it out as RATT. And I want you to come with me and do this.' And he wanted no part of it. I don't think he even wanted to go on the road. His reasoning was he's not going unless it's the original band. But the problem with that is all you do is complain about how bad Stephen is, and how hard he is to work with and deal with, and [how difficult it is] to even get [Stephen] into a freaking van to get to the gig. I think he was using that [excuse] knowing that they were not going to rejoin unless they got [ownership of] the name [back]. So it was completely stalemated by both of those sides — Warren and those two guys."

Sherman also addressed the fact that Pearcy, Croucier and DeMartini recently announced that they will perform — as RATT — at next year's edition of the M3 Rock Festival, set to take place on Friday, April 28, 2017 and Saturday, April 29, 2017 at Merriweather Post Pavilion in Columbia, Maryland. He said: "They do not have permission to play the M3 [as RATT], they do not have permission to advertise is as such. And I'll just say this: right now, to throw that out there, to make these announcements, these press releases, without having a [court] judgment, I would say is very ill-advised. And I'll leave it that for now."

Before wrapping up the interview, Blotzer spoke about the fact that his new lineup of RATT has already gone through several changes since it was first announced more than a year ago, with Alan as the sole other remaining member of the original September 2015 group. "Well, listen, I wanted to say this straight up," he explained. "This is the reality, and it's the truth. You know what the star of this band is? [It's] not me, and it's not Warren, and it's not Stephen. The star of this band is the RATT catalog, 'cause that's what people wanna hear. These guys all… There's no plans for anybody to go anywhere, but if anybody has to go, they've gotta go. But everybody's having a good time. I mean, tonight is like the 68th show. We've been busting balls this year, and we've got a lot of shows booked for next year. We plan to keep going, and that's all I can say at this point. People are just loving it, and I'm appreciative that people are behind it." 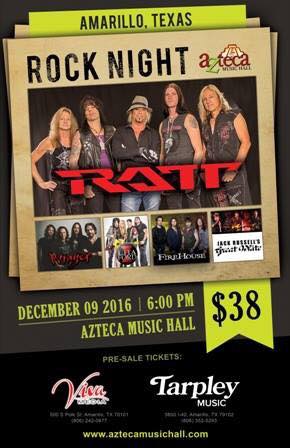