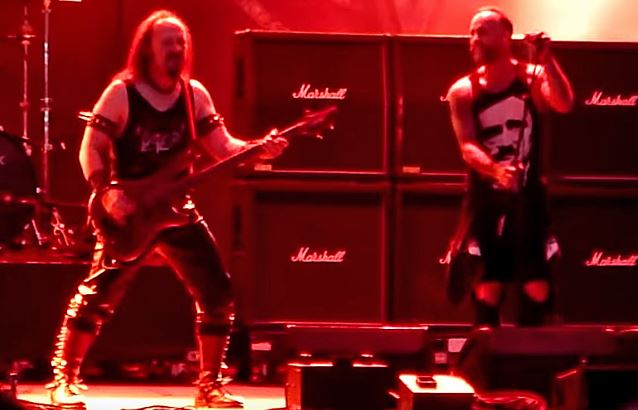 BEHEMOTH frontman Adam "Nergal" Darski joined British black metal pioneers VENOM on stage this past Sunday, August 9 at the Alcatraz Hard Rock & Metal Festival in Kortrijk, Belgium to perform the VENOM song "In League With Satan". Fan-filmed video footage of his appearance can be seen below.

Nergal previously teamed up with VENOM frontman Conrad "Cronos" Lant, Jeff Waters of ANNIHILATOR, Mike Sifringer of DESTRUCTION and Florian "Specki T.D." Speckardt of IN EXTREMO on stage to perform a cover version of the MOTÖRHEAD classic "Ace Of Spades" during the infamous all-star jam aboard the 70000 Tons Of Metal cruise in January.

Nergal stated at the time: "Out of all the bullshit preaching by Christians, one is true: miracles DO happen!

"I remember when I was 8-9 year old kid, I'd be coming back home and instead of reading books, I would crank up [VENOM's] 'Bloodlust' real loud and do air guitar in front of the mirror.

"It took me 30 years to stand next to Cronos on the same stage covering MOTÖRHEAD!

"Yes, I am living my dream… And these words sooo defining my whole life: 'if you like to gamble, I'm your man, you win some, you lose some, it's all the same to me…"